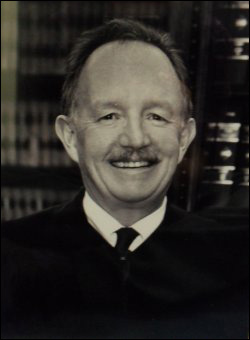 Justice Malone also sat on the bench of the 3rd Department; more information can be found HERE.

Bernard J. Malone, Jr. was born on June 4, 1943, in Glens Falls, New York. He graduated from Niagara University and received his law degree from Albany Law School in 1972. Prior to attending law school, he served in the U.S. Army from 1965 to 1969 and was awarded the Bronze Star for meritorious service in Vietnam.

After he was admitted to the Bar in 1973, Justice Malone served as an Assistant District Attorney in Albany County. Following that, he became a partner at the Albany law firm of Hinman, Straub, Pigors & Manning. He remained there until 1982, at which time he became an Assistant U.S. Attorney for the Northern District of New York.

Justice Malone was appointed by Governor Pataki in 1998 to the Supreme Court, 3rd Judicial District, to fill an unexpired term. Later that year, he was elected to a full 14-year term. In 2005, Governor Pataki appointed him to the Appellate Division, First Department, where he remained until 2008, when Governor Spitzer then appointed him to the Appellate Division, Third Department. Justice Malone remained on that bench until 2012, at which time he lost his bid for reelection to the Supreme Court. The following year, he joined the Albany law firm of Whiteman Osterman & Hanna as senior counsel.

Justice Malone resides in Delmar, NY with his wife Paula and their youngest son. In addition, they have five grown children. In his spare time, Justice Malone has coached little league baseball, youth basketball and youth soccer.