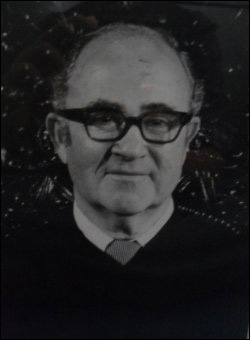 Harold Birns was born on the Lower East Side of New York City in 1914. He attended George Washington High School, New York University and Muhlenberg College before earning his law degree from St. John’s University School of Law in 1937. He received his Master of Laws degree in 1938 from Brooklyn Law School. Once admitted to the Bar, Birns was in private practice until 1944, when he became an Assistant District Attorney in New York County.

Justice Birns remained at the District Attorney’s office for 15 years, where he was assigned to the Rackets Bureau and often investigated corruption in the labor-management field and conflicts involving garment center and trucking companies. He successfully prosecuted, among others, John Dioguardi, the regional director of the United Automobile Workers, for conspiracy and bribery. After conducting grand jury investigations of the Board of Transportation, the Board of Education and the Department of Housing and Buildings, Justice Birns was appointed Deputy Commissioner of the Department of Buildings in 1959 by Mayor Robert Wagner. Two years later he was appointed Commissioner of the Department, where he spearheaded a drive to refurbish the city’s slums. He also supervised the study that led to a revision of the city’s building code, allowing for more imaginative designs and resulting in the construction of many architecturally distinguished buildings.

In 1965, Birns was appointed as a judge of the Manhattan Civil Court to fill a vacancy. He was elected to a full 10-year term later that year. In 1969, however, he was elected to the Supreme Court for a 14-year term. While on that bench, Justice Birns was appointed by Governor Carey to preside over a special and extraordinary trial term stemming from the investigation of the Suffolk County District Attorney and the Suffolk County Police Commissioner. In 1975, Governor Carey named Justice Birns to the Appellate Division First Department, where he remained until his retirement in August of 1982. In 1977, in the largest judicial disciplinary action in the history of New York State as of that date, Justice Birns was appointed, with seven other Appellate Division Justices, to look into accusations that 38 local judges (town and village justices outside the New York City metropolitan area) had fixed traffic tickets.

On two occasions during 1978 and 1979, Justice Birns was included on the “short list” of those recommended by the Commission on Judicial Nomination for positions on the Court of Appeals.

Justice Birns retired in August of 1982 due to health issues, and he passed away on November 9th of that year.

The Justice Harold Birns Award was established at St. John’s Law School in memory of Justice Birns by his wife Renee. It is given annually to the student in the graduating class who has published the best note in a student journal.

Justice Birns was married to Renee Litt Birns, with whom he had two children. All survived him.