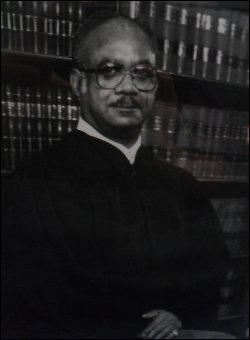 In 1985, Judge Alexander was appointed to the Court of Appeals. See his full biography HERE.

Fritz Winfred Alexander II was born on April 24, 1926, in Apopka, Florida. He was actually born Carl Bernard Zanders Jr. However, after his mother became ill (he never knew his father), he was raised in the family of his mother’s brother, Fritz Winfred Alexander, a lawyer in Gary, Indiana, who gave the young boy his name and his interest in the law.

Justice Alexander served in the U.S. Naval Reserve during World War II and the Korean War. He graduated from Dartmouth College in 1947, where he excelled in sports — as a center on the Dartmouth football team and as a “formidable force” in the boxing ring (becoming Dartmouth’s heavyweight champion of 1945). He received his law degree from New York University School of Law in 1951. After being admitted to the Bar in 1952, Alexander began practicing law in New York City and was a founding partner of Dyett, Alexander & Dinkins, his partners being David Dinkins, future Mayor of New York City, and Thomas Benjamin Dyett.

During that period, he served as District Director of the Upper Manhattan District Office of the City Rent and Rehabilitation Administration (1962). From 1968 to 1970, he chaired the Lawyers’ Committee of the Housing Task Force of the New York Urban Coalition and was co-chair of the Steering Committee of the Task Force.

In 1970, Mayor John Lindsay appointed Alexander a Civil Court Judge on an interim basis; he was elected later that year to a full term. He was designated Acting Justice of the Supreme Court at various times between 1972 and 1975. In addition, from 1974 to 1975, he served as a Family Court Judge. Justice Alexander was elected to the Supreme Court in 1977, having been appointed to an interim term earlier that year. In 1982, Governor Hugh Carey designated Justice Alexander an Associate Justice of the Appellate Division First Department. He was also appointed by Carey as a member of the State Commission on Judicial Conduct.

Governor Mario Cuomo appointed Justice Alexander to the Court of Appeals in 1985, where he was the first African-American to serve that Court in other than an interim capacity. He resigned in 1992 to become Deputy Mayor of New York City at the urging of his former law partner, Mayor David Dinkins.

After leaving office with the rest of Mr. Dinkins’s administration in 1993, Justice Alexander became special counsel to the law firm of Epstein, Becker & Green.

Justice Alexander had three children with his first wife. After her passing, he married Beverly J. Alexander. He died of cancer on April 22, 2000, at age 73.

The Judges of the New York Court of Appeals, A Biographical History, Albert M. Rosenblatt [ed.], The Historical Society of the Courts of the State of New York, New York, 2007, pp. 829-837.