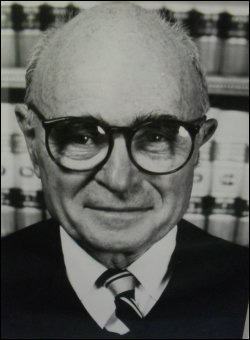 Known as a scholar and an authority on law and social change, Sidney Howard Asch was born in New York City in 1919. He had a formidable scholastic record, having graduated from City College of New York in 1940 with the silver Pell medal for the second highest scholastic average, the Ward medal in government, a Phi Beta Kappa key and other honors. He received his law degree from Columbia Law School in 1943, having gone through school largely on scholarships. In 1956 he received his Ph.D. in sociology from the New School for Social Research.

From 1948 through the early 1950s, Asch was a Professor of Law at New York Law School. He was also a lecturer in government at City College and an arbitrator for the American Arbitration Association. Later on, he also taught at Mount Sinai Medical School (psychiatry and law).

The following year, Justice Asch was elected as a Civil Court Judge, where he remained until 1970, when he was elected to the Supreme Court, 1st Judicial District.

In 1963, Justice Asch was named Chairman of the Bronx Borough Committee of the New York City Youth Board. The Committee worked with the Youth Board on its programs to prevent juvenile delinquency.

Justice Asch remained on the Supreme Court bench until 1982, at which time Governor Hugh Carey appointed him to the Appellate Division First Department, where he stayed until his retirement in 1995. After his career on the bench, Justice Asch became a Judicial Hearing Officer and a referee for the Departmental Disciplinary Committee, as well as of counsel to what is now Sullivan Papain Block McGrath & Cannavo.

Justice Asch was married to Amy Cohen Asch. They were the parents of two daughters.