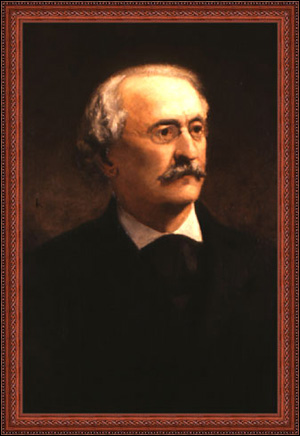 On September 19, 1881, President James A. Garfield died of an assassin’s bullet. His last words were “My work is done.” With Garfield’s shooting, however, the work of the prosecution began. The trial of the assassin, Charles Guiteau, was one of the most renowned in our history.

At the request of President Chester Arthur, the prosecution was aided by one of the nation’s most prominent lawyer’s, John K. Porter,1 who from 1865-1867 had served as a judge of the Court of Appeals. The New York Academy of Medicine describes the event this way:

On July 2, 1881, President James A. Garfield was preparing to escape the summer heat and malarial swamps of the nation’s capital by boarding a train at the Baltimore and Potomac Railroad Depot, when suddenly, Charles Guiteau appeared in the President’s vicinity and shot him. Guiteau, who was immediately apprehended for his crime, languished in prison while the President lingered in pain in the White House. On September 19, 1881, President Garfield died, and Guiteau was soon indicted for murder.

Some of the country’s most prominent psychiatrists, one of them a fellow of The New York Academy of Medicine, encouraged a plea of not guilty, by reason of insanity. What ensured was undoubtedly the most celebrated ‘insanity trial’ of the nineteenth century. The American public, who had been avidly following the deteriorating health of the President and clamoring for news of his would-be assassin, found themselves immediately spellbound by reports of a courtroom drama whose tension and emotion they could never have anticipated. The trial quickly became not simply the trial of an assassin, but a trial of American psychiatry itself, as a fundamental but essentially private disagreement within the psychiatric profession about the very nature of insanity became the unexpected focus of a cause célèbre.2

Judge Porter’s cross-examination of Guiteau was so effective in defeating Guiteau’s insanity defense that Francis L. Wellman gave it a chapter in his classic work The Art of Cross-Examination. In its December 2, 1881, headline, the New York Times characterized the cross-examination as “Guiteau’s Day of Torture.”

It would be wrong, though, to connect Judge Porter with the Guiteau trial to the exclusion of his other, myriad accomplishments. Few people dominated the New York Reports for as long as he did. Beginning with his first Court of Appeals case in 1854, he appears extensively in the Court’s official reports. Although he was said to have defective sight and hearing, he was one of the country’s premier lawyers, having argued over fifty appeals in 20 N.Y. to 26 N.Y. alone. He argued his first appeal in 10 N.Y. and his last in 82 N.Y., over 100 in all, with time out to serve on the Court from 31 N.Y. through 37 N.Y. (i.e., 1865-1867).

Judge Porter was born in Waterford (Saratoga County), New York, on January 12, 1819. His father, Elijah Porter (1775-1841) was a physician, the son of Major Moses Porter, a Revolutionary War hero who in 1765 married Sarah Killam, a lineal descendant of Captain Miles Standish.

At 16, Porter entered Union College, in September 1835, receiving his degree in 1837 with all the honors any student could win (including Phi Beta Kappa), along with a warm commendation from Governor William L. Marcy, one of the trustees. He attended the National Whig convention at Baltimore in 1844, which nominated Henry Clay for the Presidency. On Porter’s admission to practice before the State’s Supreme Court in 1846, he took his rank among the bar’s leadership, and was a member of the State Constitutional Convention that year. In 1861, he distinguished himself as a member of New York’s constitutional convention.

In 1847, Porter married Sophia Todd (the daughter of Eli M. Todd, a member of the State Assembly in 1828), and the following year left Waterford for Albany, where his practice grew, in partnership with Peter Cagger and Nicholas Hill, Jr., who had served as State Law Reporter from 1841-1844. When Hill died in 1859, Samuel Hand, who later served on the Court of Appeals in 1878, joined the firm. At the time, the firm’s library was said to be the most valuable ever collected in the profession.

On January 2, 1865, Governor Reuben E. Fenton appointed Porter to the Court of Appeals to fill a vacancy created by the resignation of Henry R. Selden (1805-1885). In November of that year, he won election to the Court, defeating Martin Grover (1811-1875).3 Commentator Irving Browne recounts that the greatest speech he ever heard in a courtroom was made by John K. Porter on the question of the good faith of an assignment of creditors,4 and that as a judge, Porter’s prose is seen at his best in Bascom v. Albertson (34 NY 584 [1866]), in which he wrote, “they had been warned by the experience of their ancestors that the free alienability of property is as essential to the healthful condition of a State as the flowing of the tides to the purity of the sea, or the circulation of the blood to animal life.”

Judge Porter served only until December 31, 1867, when he resigned to practice law in New York City, where he prospered as one of the luminaries of the bar. In “The Art of Advocates and Public Speaking” (Williamson Law Book Co. 1905), the author, Joseph W. Donovan, quotes a number of prominent lawyers and their favorite words of advice. John K. Porter’s were “Stop short when you have gained the real point with a witness” (id. at 3). His clients included the Erie Railway, Western Union, and Central Pacific. In 1875, he represented Henry Ward Beecher in his case against Theodore Tilton, who in one of the most scandalous cases of the post-civil war era accused Beecher of adultery with Tilton’s wife. The jury could not reach a verdict.

In 1876, two weeks after voters went to the polls to choose between Rutherford B. Hayes and Samuel J. Tilden, the New York State Bar Association was founded. John K. Porter was the Association’s first president. He challenged the new organization to “exercise a collective and permanent influence” on the great issues of the day (74 NY L Rev 64 [1940]).

For a number of years Judge Porter continued to practice law, but his activities were curtailed for the last seven years of his life. In failing health, he spent the summers at Schroon Lake and winters mostly in New York and the South.

Judge Porter died on April 11, 1892, in Waterford, where he had been born 73 years earlier. He left a widow, his second wife Harriet B. Tibbets (nee Cramer) Porter, whose father John Cramer, as a presidential elector in 1804, cast a vote for President Thomas Jefferson’s reelection.5 His first wife, Sophia Todd, died in 1858.

Judge Porter was survived by a son, William L. Porter, a lawyer, whose mother was Judge Porter’s first wife.6 There is a Union College scholarship established by his widow, in his name. It is available to students attending Albany Law School. In his day, Judge Porter’s reputation was towering. In an Albany Law Journal article, the writer refers to him as coming “nearer to being a genius than any other man at our bar. . . . we have watched his wondrous power . . . until we have grown to regard it as almost magical.”7 In a tribute to Rufus Choate, one writer declared that Choate was the best equipped advocate who ever spoke the English language, and that the man who most nearly approached him was John K. Porter.8 In a lengthy biographical sketch of Judge Porter by Grosvenor P. Lowrey, these words stand out: “[Porter’s] personal and professional integrity stood like a mountain height in comparison with the average man’s fidelity.”9

Judge Porter was survived by a son, William L. Porter, an attorney. No living progeny have been identified as yet.

Clark, The Murder of James A. Garfield: The President’s Last Days and the Trial and Execution of His Assassin, McFarland & Co., Jefferson, N.C., 1994, 185 pp.

Snyder, Great Speeches by Great Lawyers: A collection of arguments and speeches before courts and juries (1892).

Address of the Honorary Chancellor of Union University, reported by J. Munsell, 1879.

Proceedings of the Albany Bar on the occasion of the death of Lewis Benedict of Albany (1864), 27 pp.

Treasury notes a legal tender: Argument of John K. Porter in the Court of Appeals of the State of New York, in the case of Metropolitan Bank and others, superintendent of Bank Department, appellant (June 27, 1863), reported by Wm. Blair Lord (Weed, Parsons and Company), 1863.

Personal liability laws: Argument of John K. Porter for the plaintiffs in error in the Supreme Court of the United States in the cases of Duncan, Sherman & Co., et al vs. James M. Smith, receiver of Oliver, Comstock & Cassidy, 1862.

The Parish will case: Argument of John K. Porter, in behalf of the respondents, in the Court of Appeals of the State of New York (January 10, 1862), reported by J. Munsell, 1862.

Argument of John K. Porter, counsel for the disfranchised corporators of Trinity Church, delivered before the Select Committee of the Senate, Albany (1857).

Argument of John K. Porter, on the trial at Albany, of William Landon; Acquitted July 21, 1855, on a charge of violating the Prohibitory law, reported by H.H. Van Dyck, 1855.

Argument of John K. Porter of counsel for the managers on behalf of the Assembly, on the trial of John C. Mather, one of the Canal Commissioners (1853).

Address Delivered Before the Young Men’s Association of the City of Albany, Weed, Parsons, 1850.