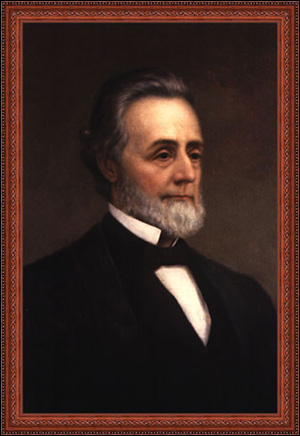 Theodore Miller’s legal career spanned almost 50 years and in that time he became a respected jurist who was fondly remembered for preserving peace in Columbia County, his home, when it mattered most. His colleagues would note at the end of his career, “We have found you always ready and prompt in bearing your share of the common burden, courageous and conscientious in forming your own opinions and listening patiently and determining wisely where conclusions differed.” Truly a man of law, although heavily involved in the politics of the day, Miller remained committed to and fascinated by the development of jurisprudence in New York state until his death.

Theodore Miller was born May 16, 1816 in Hudson, New York. Stephanis Muldor, the first of his paternal ancestors who immigrated to America with the Van Rensselaers, settled in Albany, before 1650, arriving from Nykirk, in the province of Gelderland, Holland. The family fled from France to Holland in the latter part of the sixteenth century to escape religious persecution, and family members were known by the name De Muldor. After arriving in America, the name underwent several changes from Muldor, Mulder, Mullor, Muller until it finally became Miller. Theodore Miller’s great-great-grandfather, Cornelis Stephanis, purchased a large tract of land in the town of Claverack from Captain Heindrick Van Rensselaer. Miller’s maternal ancestors were English Puritans who settled in Hudson in 1790.

Judge Miller’s father, Cornelius Miller, was an accomplished Columbia County lawyer and politician of his time who practiced law early in his career in partnership with future-President Martin Van Buren. Cornelius Miller died in 1922, while holding the office of clerk of Columbia County, an office conferred by gubernatorial appointment. Theodore Miller was six years old at the time of his father’s death. Although Miller could not have known his father well, he developed habits of industriousness, studiousness, and discipline following in his father’s footsteps.

Judge Miller acquired his preparatory education at Hudson Academy. He wanted to attend college but his grandfather, who held the purse strings, wanted Miller to study law. Miller began the study of law at age 16 in the office of Campbell Bushnell, a leader of the Columbia County Bar, and one of the most distinguished lawyers in the State. Miller was admitted to the bar at age 21 in 1837.

When his maternal grandfather died, he left a large amount of real estate in Hudson, Miller took responsibility for this property, laying a foundation for his proficiency in estate law.

Owing to his interest in politics, Miller was involved in various campaigns. He was leader of the Democratic Party in his county and “his faith in the principles of his party was steadfast. He accomplished much in reconciling differences among its members, and was always ready to meet his political opponents with boldness and enthusiasm. . . .”1

In 1843, the old Court of Common Pleas appointed him District Attorney of Columbia County. A few months later, in the autumn of 1844, an “Anti-Rent” war broke out in Columbia County. The “Anti-Renters,” a secret association of farmers, were formed in 1839 to oppose the eviction of tenants of leased lands. Because of harsh distraining laws and the way in which land was distributed after the Revolutionary War, tenant-farmers often faced the loss of lands, and the improvements along with them, when crops failed or there was overproduction. The Anti-Renters sought to destroy legal titles so landlords could not prove ownership. The Anti-Renters opposed the payment of rent, considering those who did so traitors to the commonwealth. The Anti-Rent war was led by Smith Boughton, a Rensselaer County physician known as “Big Thunder.” The rioters in 1844, disguised as Native Americans, tried to persuade tenants to resist police who sought to enforce the rights of landlords. One officer was attacked during an outbreak and one person was killed. Miller, along with John Van Buren,2 the State Attorney General, proved efficient in subduing the rebellion and in prosecuting those responsible. When the ringleaders were arrested, a rescue effort was planned by the Anti-Renters and the State had to send several companies of infantry and cavalry to protect the jail and help maintain peace. The Albany Argus reported, “[Miller’s] energetic and fearless maintenance of the law did more, perhaps, than any other person to crush that ill-advised movement.”

In 1846, Miller was reappointed District Attorney by the Court of Common Pleas. When his term expired, he engaged in private practice, declining political office. He was a delegate in 1860 at the national Democratic Convention in Charleston, the northern members of which adjourned to Baltimore and nominated Stephen A. Douglas for president.

After the reorganization of the court in 1870, Governor John Hoffman appointed him Presiding Justice of the General Term in the Third Judicial Department, embracing twenty-eight counties. The Albany Argus, commenting on Judge Miller’s temperament noted, “The young men of the bar found in him a judge who heard them patiently and respectfully, and from whose presence they went away satisfied that, whatever might be the fate of their cases, they had a fair and respectful hearing, and would have an honest, intelligent decision.”3

According to his colleagues, Judge Miller’s chief characteristic while serving on the Court of Appeals and indeed, the one to which his success in life was largely due, was an untiring industry. It was widely accepted that “opinions written by him display[ed] an exhaustive investigation, soundness of reasoning, and a ripeness and breadth of judgment that mark the man of judicial mind, who has been well grounded on sound principles, whose heart and life are his work, and who, with ambition which all must honor, [sought] to do his part in righting the wrong and in fixing on a firm basis the jurisprudence of his State, and by thus doing to rear for himself an enduring monument.”5 He had “one of the best balanced judicial minds in the State.”6

Near the end of his career, Judge Miller’s health deteriorated significantly. In the last two years of his term he gradually lost his sight and required the assistance of a stenographer to execute his duties. He wrote one of his most important decisions, People ex rel. Wood v. Lacombe, 99 NY 43, 49-50 (1885), in this period. Judge Miller wrote the decision which is “most often cited by New York jurists to establish the legitimacy of courts using legislative intent in statutory construction.”7 He wrote:

Judge Miller’s contribution to this still-ongoing debate is a lasting testament to his wisdom and judicial philosophy. His opinion was, later, often cited in majority decisions by several state supreme courts including Arizona, Colorado, Connecticut, Indiana, Maine, Michigan, Ohio and Utah.8

Miller was unable to serve the full fourteen years, because he reached the constitutional age limit of 70 during his term.

Upon retiring from the Court, his colleagues wrote:

We have seen you persisting in your work when health was threatened by the unending pressure and strain and when we thought that you, equally with ourselves, would be better for a needed rest, and we have learned to admire the patient determination which enabled to do your work thoroughly and accurately in spite of the obstacles interposed. . . . The records of the court show the multitude and difficulty of the questions upon which you have been required to express its ultimate opinion or contend manfully for your own, and testify to the completeness and range of your learning, the patience of your investigations, the unswerving honesty of your judgment and the ability and accuracy with which your conclusions have been reached and then expressed.

About his retirement, the Albany Argus wrote:

His opinions, particularly upon the subjects of the law governing municipal corporations and of criminal law, also as to construction of wills, will always be the recognized and leading authorities controlling future litigation. . . . If office is as it should always be [sic], in practice as well as theory, a trust, and the incumbent the servant of the people, Judge Miller has well earned the tribute: ‘Well done, thou good and faithful servant,’ and the good wishes of all good citizens will attend him in his retirement. Although Judge Miller, after 50 years of hard, exhausting work, is entitled to a rest from further toil, and although it may seem selfish to desire it, yet knowing something of his active, tireless mind, to which rest for a lengthened period would be almost irksome – in fact, an impossibility – we cannot forbear the expression of a very natural wish that he may engage himself in some work, either professional or literary, which his ripe judgment, wide experience, and great abilities will render of priceless value to the public.

In a touching letter to his colleagues, Judge Miller said:

Too much vigilance cannot be exercised in a court of last resort in the disposition of the important and varied interests involved. . . . In retiring from the Court of Appeals, I shall cherish with grateful recollections the harmonious relations that, at all times, existed among its members, their mutual confidence and respect, the affectionate and friendly feelings manifested, and the courtesy which has so strongly marked our intercourse with each other, and which has lifted us far above the strife of partisanship or a mere desire to enforce individual views.

Judge Miller’s love of the legal profession stands as his greatest legacy.

After retirement, Judge Miller returned to his home in Hudson to live quietly, spending his days managing his property and keeping up with current affairs. He was blind the last three years of his life. He died on August 18, 1895 and is buried at the Cedar Park Cemetery in Hudson, New York. Upon his death, his colleagues wrote:

Few men possessed in greater degree the capacity for patient and laborious study, for deliberate and exhaustive investigation. His opinions exhibited a familiarity with all that had been decided bearing upon the case before him, and a capacity for applying it logically and with discrimination to the problem awaiting solution. As a consequence, he was firm and courageous in his convictions, adhering to them with some persistence, defending them warmly, and yet open to all just argument and ready to yield when satisfied that duty required it.

Judge Miller was survived by his wife, Alice, and two children, Margaret and Peyton F. Miller. His son, Peyton, was a lawyer in Albany who died on June 10, 1920, without children. We are unaware of any offspring of Judge Miller’s daughter, Margaret.

Chadbourne’s Public Service of the State of New York.

Letter from Judge Miller to Colleagues re Retirement, 105 NY 683.

Eulogy for Ambrose L. Jordan, found at http://www.usgennet.org/usa/ny/county/columbia/ biogrphs/jordan_ambrose.htm. As with other judges long departed, this may be only a partial list of his writings.