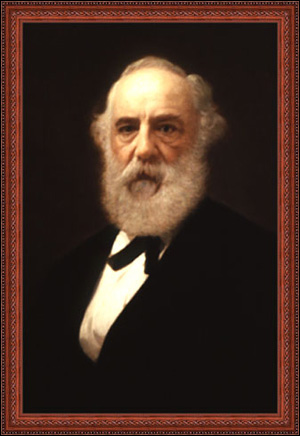 Alexander Bryan Johnson, a philosopher and author, dedicated one of his books to New York State Court of Appeals Judge Alexander Smith Johnson, his eldest son. The dedication, dated 1854, reads as follows:

I believe your recollection can extend back to no period when we were not companions of each other, and I often query which of us is more indebted to the other for intellectual and moral benefits thereby received ; but I usually adjudge myself to be the debtor. The topics of this book you have heard from me in every form in which my intellect can conceive them, hence I inscribe the book to you, not to communicate its contents, but to record the social relationship which has always existed between us.

Of the merits of the work neither of us is in a good position to judge-I from self-love, and you from prepossession towards me. It has, however, exerted a kindly influence over my leisure during a long life that had been marked with sorrows of no ordinary magnitude. It has, indeed, been to me like the poor man’s lamb in the parable of the prophet. “It has grown up with me and my children, eaten of my meat, drunk of my own cup, lain in my bosom, and been unto me as a daughter. Praying you may possess a son to whom you may be able to transmit a memorial of social intercourse, like that recorded in this dedication, I remain yours most faithfully, THE AUTHOR.1

This passage gives us a small glimpse into Judge Alexander S. Johnson’s intelligence and the high esteem to which he was held. By no means, however, does it give a full account of the depth and breadth of his intelligence, both in the area of the law and other subjects. Nor does it adequately describe his impartiality, rectitude of purpose, or other intangible qualities he brought to bear as a student who entered Yale College at age fourteen, a college graduate who studied at Yale Law School and under a number of experienced legal practitioners, an accomplished lawyer, a highly respected Judge who served on the New York State Court of Appeals (twice) and the United States Circuit Court for the Second Judicial Circuit, a member of the Regents for the State University of New York, a Presidential appointee charged with representing the interests of the United States through the settlement of claims arising from a treaty between the United States and Great Britain, and a husband and father of four. To fully appreciate Judge Johnson’s accomplishments during his sixty-plus years and his legacy, we have to examine where he came from and, through the positions he held, how he developed as a man, scholar, and public servant.

Judge Johnson, a great-grandson of President John Adams, was born to Alexander Bryan Johnson (1786-1867) and Abigail Louisa Smith (Adams) Johnson (1796-1838) in Utica, New York on July 30, 1817. His father was a native of Gosport, England.2 His mother was a granddaughter of John Adams.

Johnson attended a private school in Utica before entering Yale College in 1831.3 After graduating in 1835, he spent a year at Yale Law School.4 He then returned to Utica and continued his legal studies under Judge Samuel Beardsley until July 1838 when he was admitted to the bar. When Johnson turned twenty-one later that month, he immediately started practicing law in Utica.

By January 1839, Johnson and Beardsley formed a partnership. By June of that year, however, Johnson found it difficult to convince those who knew him as child that he could handle the responsibilities of being an attorney. He therefore moved to New York City where he partnered with E.P. Hurlbut, who was, upon the 1847 reorganization of the State’s judiciary, elected a Justice of the State Supreme Court, and Charles F. Southmayd. After Hurlbut’s election, Johnson and Southmayd continued as partners.

In November 1851, at the age of 34, Johnson was elected to an eight-year term as a Judge of the Court of Appeals. On November 8, 1852, he married 19-year-old Catharine Maria Crysler (1833-1898) of Niagara Village, Ontario, Canada, daughter of Ralph M. Crysler. Several weeks earlier, Johnson had written to Judge Charles Ruggles:

To make my humble confession as I ought, the fact is that Brother Gardiner & Bro. Jewett have so berated me about the disgrace I am bringing on the Court by being a bachelor that I have taken their advice to heart & have been during this vacation laboring rather in that field, than in the more usual line of judicial labor & the result is that in the course of this coming vacation there is a reasonable prospect that this crying reproach upon the court will be taken away. The [worst] of it is that between me & the fair lady five hundred miles intervene & that the necessary journeyings in that direction, necessitated as well by duty as inclination will not only deprive me of the pleasure of visiting you at Po’keepsie but will also make it a pretty hard matter to dispose of my share of the business. It may perhaps interest Mrs. Ruggles, to whom I pray you to present my respects, to know that the lady is the only daughter of an old acquaintance and friend of Mrs. Elsie Gansevoort afterwards & now Mrs. Crysler of St. Catherine’s Canada west.

During his initial tenure with the Court, Johnson developed a reputation for being an intelligent, independent, and fair-minded jurist.5 Regarding Johnson’s fairness, George F. Comstock, a Court of Appeals Judge who served with Johnson from 1856-1859, had this to say: “I think I can truly say of Judge Johnson, that his was the most absolutely impartial mind that I ever knew. * To me he seemed always to be inaccessible even to the subtlest of those influences which sometimes, it must be confessed, are a disturbing weight in the even balances of justice.”6  For the last two years of his term, Johnson was Chief Judge of the Court.7 Upon the completion of his term, Johnson stayed in Albany and resumed the practice of law.8

Judge Johnson did not focus solely on the study and practice of the law. To the contrary, he constantly sought to challenge himself and study subjects, like chemistry, that were far removed from his profession.

In 1863, Johnson was elected a Regent of the University of the State of New York.9  In 1864, President Abraham Lincoln, pursuant to a treaty entered into by the United States and Great Britain in July 1863, appointed Johnson to the office of United States Commissioner to settle the claims of the Hudson’s Bay Company and the Puget’s Sound Agricultural Company which arose from the Third and Fourth Articles of the Oregon Treaty of 1846 between the United States and Great Britain for the settlement of the Oregon Question.10 The claims in question amounted to approximately $6,000,000.11 Johnson and John Rose, the gentleman who represented the interests of Great Britain, worked diligently to resolve the claims and by September 1869, rendered their final decision, awarding $650,000 in gold to the claimants.12 Both Johnson and Rose were widely hailed for the approach they took in resolving claims ranging in value from a few thousand dollars to millions of dollars, the soundness of their reasoning, and the gentlemanly way they conducted the inquiry.13

In 1867, while still United States Commissioner, Johnson’s father died. Johnson and his father previously reached an understanding that if Johnson survived his father, he would return to Utica. Accordingly, in 1868, Johnson returned to Utica. Between 1868 and January 1873, Johnson not only continued to perform his duties as United States Commissioner and resumed the practice of law, he was called upon by the Governor of New York to serve New York State as one of the managers of the State Lunatic Asylum. While working in this capacity, Johnson also found time to serve his local community as a trustee of the Utica Savings Bank.

In January 1873, Governor John Adams Dix appointed Johnson to succeed Judge Ward Hunt as a Commissioner of Appeals.14 Johnson served as Commissioner until December 29, 1873 when Governor Dix appointed him to serve as an Associate Judge of the New York State Court of Appeals to fill the vacancy left by the tragic and untimely death of Judge Rufus W. Peckham, Sr.15 Johnson’s second term with the Court began in January 1874 and concluded at the end of that year.16
Johnson, a longtime Republican, sought to be elected on the Republican party ticket, but was defeated at the polls by Judge Theodore Miller.

Johnson approached his new duties with his typical intelligence and industry. However, by 1877, his health began to give way. In early January 1878, he left for Nassau N.P., Bahama Islands, hoping that the more favorable climate would alleviate his health problems. On January 26, 1878, however, a few months before his 61st birthday, Judge Johnson died in Nassau. He was interred in Utica, New York.

The New York legal community, as a whole, mourned Johnson’s passing. There were many tributes to Johnson after he died, including one read by Chief Judge Sanford E. Church on February 5, 1878. Regarding the various judicial positions Johnson undertook, Chief Judge Church stated:

[H]e manifested the qualities of a great Judge. His mind was not only judicial, but scientific. He was patient and laborious. He had a firm grasp of legal principles, a sound judgment guided by strong common sense, and broad culture; and his opinions will always be regarded as among the best to be found in our reports. His was a robust nature. He was high-toned and chivalrous in his feelings, a sincere friend, and a genial and interesting associate.

A number of letters between Marion L. Phillips, Alumni Registrar, Yale College (and staff), and Mary Seymour St. Arnauld and Alexander B. Johnson, Judge A. S. Johnson’s grandchildren, written in July and August 1937.

A portion of an article appearing in the London Times of September 27, 1869 addressing the “Settlement of the Oregon Difficulty.” This was appended to Johnson’s letter and incorporated into the Record compiled by Thacher.

Johnson, The Meaning of Words: Analyzed Into Words and Unverbal Things, and Unverbal Things Classified Into Intellections, Sensations, and Emotions, D. Appleton and Co. (1862).
Letter from Judge Alexander Smith Johnson to Thomas Anthony Thacher dated July 30, 1875. This letter was incorporated into the “Biographical and Historical Record of the Class of 1835 in Yale College” compiled by Thacher.

Obituary Record of Graduates of Yale College (No. 8 of the Second Printed Series, and No. 37 of the whole Record) (presented at the June 26, 1878 Alumni Meeting).

The Oregon Treaty of 1846 (formally titled Treaty with Great Britain, in Regard to Limits Westward of the Rocky Mountains) (signed June 15, 1846).

Proceedings of a Meeting of The Members of the Bar in the City of New York, On the Occasion of the Death of Hon. Alexander S. Johnson, Circuit Judge of the United States (February 5, 1878).

Thacher, Biographical and Historical Record of the Class of 1835 in Yale College For The Fifty Years From The Admission Of The Class To College, 1831-1881 (1881).

To this author’s knowledge, Judge Johnson did not write or publish any books or articles. Private letters written to and from Judge Johnson are part of the Johnson Family Papers (1776-1937), which are housed at Cornell University’s Division of Rare and Manuscript Collections at the Carl A. Kroch Library in Ithaca, New York. These papers can be viewed by the general public. Also, at age 58, Judge Johnson wrote a letter, briefly detailing his life’s work to that point, to his friend Thomas Anthony Thacher for use in a biographical record of Yale College graduates Thacher was compiling.