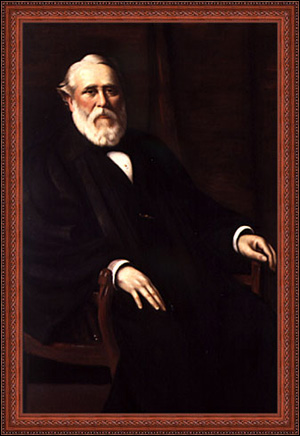 Denis O’Brien would likely never have existed but for his parents’ early departure from County Clare, Ireland. They moved to America in 1835, a mere five years before the start of the Great Famine that devastated the Irish population and provoked a wave of emigration. The young immigrants moved to Ogdensburg, New York, in St. Lawrence County on the Canadian border. After two years of clearing the land to make it suitable for farming, the couple had Denis on March 13, 1837. Denis grew up in Ogdensburg and went to public school there, working on the farm in summer and fall while attending classes in the winter and spring. After graduating from the Ogdensburg public schools, he read law at the firm of Meyers & Magone, and was admitted to the bar in 1861. Shortly thereafter, he moved to Watertown, Jefferson County, where he would make his adult home.

In 1863, O’Brien married Margaret McCahil, who was four years his junior. He began practice in Watertown as junior partner to Jesse T. Reynolds, and became active in local Democratic politics. In 1869 his political interests paid off, and O’Brien was elected an alderman of Watertown. His popularity as an alderman resulted in his election as Mayor of Watertown, serving from 1879-80. In 1880, O’Brien went to the national Democratic convention as a delegate. In the same year, he was nominated as the Democratic candidate for Congress from Jefferson, Herkimer, and Lewis counties, but did not win.

From 1879-1883, O’Brien made statewide Democratic connections as a member of the Democratic State Committee. These connections, coupled with his broadly acknowledged skill as a lawyer, won him the nomination to be Attorney General of New York. In 1883, he won, defeating the incumbent, Leslie W. Russell. When O’Brien took office, his fellow Democrat Grover Cleveland served as Governor. In internal party debates, both men had supported adherence to the now-defunct gold monetary standard. O’Brien’s term as Attorney General was impressive enough to garner both the Republican and Democratic nominations for reelection, and as expected, he handily defeated the two minor-party candidates. O’Brien’s second term lasted from 1887 to 1888.

O’Brien then returned to Watertown, but briefly. He received Tammany Hall’s endorsement for the Democratic nomination to the Court of Appeals, and won his party’s support unanimously at the state convention. He was elected in 1889, joining the Court on January 1, 1890 and in six years wrote 300 majority opinions, in what must have been a happy chapter of his life.

On Christmas Day, 1896, O’Brien’s wife Margaret died, survived by the judge and their five children. The judge was so despondent that it took his supporters’ best efforts to convince him to remain on the bench. He won reelecting in 1903, with the endorsement of both major political parties, just as he enjoyed during his race for Attorney General. This bipartisanship was part of a growing movement on both sides to remove some of the ordinary political rancor from Court of Appeals elections, in favor of a more civil and merit-based approach. O’Brien retired in accordance with the constitutional age limit on December 31, 1907.

During those seventeen years on the Court, Judge O’Brien developed a jurisprudence in line with the laissez-faire economics of the day, but also protective of criminal defendants. In the first category, Judge O’Brien’s most famous opinion came in People ex rel Rodgers v. Coler,1 in which the Court prohibited a city from withholding payment for public works from a contractor who had violated the 1897 prevailing wage statute. The writing first adopts an unjust enrichment-type argument, suggesting that it was unfair of the city to allow the project to be completed and then object to paying for the work. What attracted the attention of the public, however, was what came next: O’Brien declared, for the Court, that the prevailing wage statute was unconstitutional because it interfered with the workers’ right to contract with the employer at whatever wage amounts both found acceptable and thus denied the workers substantive due process. Interestingly, O’Brien argued that the prevailing wage law would result in the elderly and infirm being unemployed, because public works contractors would only be willing to hire them at reduced wages. The opinion also notes, in passing, that the provision of the statute prohibiting public contractors from hiring aliens or nonresidents of New York was also unconstitutional. This classic example of judicial advancement of laissez-faire economic ideology at the expense of the Legislature was met with an amendment to the state constitution in 1905 explicitly authorizing the Legislature to pass a prevailing-wage statute if it chose (but without the xenophobic component).2

In another example of Judge O’Brien’s deferential attitude to business interests, he authored a highly unusual article in the Columbia Law Review,3 defending the Court’s decision not to extend an equitable remedy to a plaintiff whose image had been appropriated without consent by an advertiser.4 O’Brien wrote, “We may discard entirely the suggestion that a lady has any thing in the nature of a property right in her form or features that is invaded by the circulation of her picture against her will or without her consent. . . . A woman’s beauty, next to her virtues, is her earthly crown, but it would be a degradation to hedge it about by rules and principles applicable to property in lands or chattels.”5

On the criminal front, Judge O’Brien’s most noted judicial writing was actually a dissent, in the Court’s 4-3 affirmance of the first-degree murder conviction of Albert T. Patrick.6 In a case that originally attracted much public notice, Patrick was accused of collaborating with the valet of a rich, elderly, society man to kill the employer by placing a chloroform rag over his mouth. Judge O’Brien wrote that the evidence was insufficient to show that the 85-year-old victim was still alive when the valet acted against him. Patrick later won a pardon from then-Governor John Dix.

Judge O’Brien also stood fast for criminal defendants’ rights in a notorious case concerning out-of-control hazing at Cornell University.7 To provide a rude welcome to freshmen at their annual banquet, held on February 20, 1894, the sophomore class placed jugs full of chlorine-creating chemicals beneath the dining hall. The release of poisonous chlorine gas killed a kitchen worker and left many students injured. Frederick Taylor, the defendant, lived with one of the perpetrators but refused to answer questions about the incident from the investigating grand jury. Judge O’Brien, writing for the Court, held that the Fifth Amendment right against self-incrimination was to be applied broadly and protected Taylor from giving up even a link in the chain of evidence against himself.

Judge O’Brien also authored the Court’s unanimous opinion upholding the constitutionality of capital punishment by electrocution, rather than hanging.8 That controversial change in execution policy came by statute in 1888, and the decision upholding it in 1890.

Judge O’Brien lived but two years after his retirement from the Court in 1907, but continued to practice law. His death came suddenly, as the result of appendicitis, on May 18, 1909. His funeral mass was held at Holy Family Church in Watertown, from where his remains were removed for burial at Calvary Cemetery. In their official memorial remarks published in the New York Reports, Judge O’Brien’s old colleagues described his opinions as “valuable contributions to the body of jurisprudence.”9

Emerson, ed., “Biography of Denis O’Brien,” in Our County and Its People: A Descriptive Work on Jefferson County, New York (Boston History Co.: 1898).