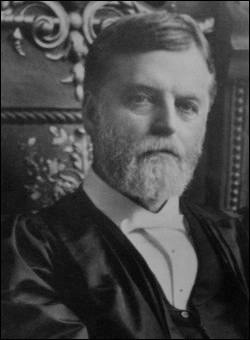 Justice Williams also sat on the bench of the 4th Department; more information can be found HERE.

“In the thousand and one details which make up the character of a successful lawyer and judge, Justice Williams fortunately possesses those most essential to popularity and high standing.” (Our County and its People, a Descriptive Work on Jefferson County, New York, Edgar C. Emerson [ed.], The Boston History Co., Syracuse, NY, 1898.) He was known for his fair-mindedness and his eagerness to share his knowledge with younger members of the profession.

Pardon C. Williams was born on July 12, 1842 in Ellisburgh, Jefferson County, New York, son of William and Jerusha (Plummer) Williams. His father was a farmer, owning and occupying a number of farms over the years.

Williams’s early life was spent on the family farm. Once he started school, his time was divided between working the farm and studying. He attended Union Academy in Belville, New York, the Clinton Liberal Institute, Clinton, New York and St. Lawrence University in Canton, New York. In 1862, he moved to Watertown and began studying law in the office of Hammond & Bigelow. When Williams was admitted to the bar in 1863, he remained in Watertown at the same firm, which eventually became known as Hammond, Winslow & Williams. He left there in 1867 to start his own practice.

Shortly thereafter, Williams became a Republican candidate for District Attorney of Jefferson County and was elected in 1868. He served in that capacity for a total of six years, having been reelected upon expiration of his first term. During that time he became known as a successful prosecuting criminal lawyer, although he preferred the civil side.

After his public service, Williams went back to practicing law, and in 1874 formed a partnership with John C. McCartin. The firm of McCartin & Williams, through its ten-year existence, was regarded as one of the strongest law firms in northern New York. The law firm was dissolved in 1883, upon the nomination and election of Williams to the Supreme Court bench of the Fifth Judicial District of the state. During Justice Williams’s tenure on the bench, Governor Flower designated him to preside at the Troy, New York murder trial of Bartholomew Shea; he later presided at other murder trials, including those of Roxanna Druse (Herkimer, New York), Frank Mondon (Herkimer), Morris Congdon (Cortland) and Calvin McGoota (Utica).

In 1895 Governor Morton designated Justice Willliams an Associate Justice of the newly formed Appellate Division First Department in New York City, a position he held until January 1898 when his term expired. He then was renominated by both the Republican and Democratic parties and soon reelected. Since the local people were not pleased that Williams had to leave his district in order to serve on the First Department bench, he pledged now to remain in the Fifth Judicial District. Thus, in 1900 he was designated an Associate Justice of the Appellate Division Fourth Department, which included his district.

As a lawyer, Williams was known for his diligence in collecting facts and details and properly presenting them to a jury. As a judge, he was fair-minded and known to dispose of trial cases in a timely manner.

Justice Williams was an active member of his community, as evidenced by his membership in both the Black River Valley Club in Watertown and the Genesee Valley Club in Rochester. He married Sarah E. Hewitt on September 9, 1868 in Watertown. The had six children, three of whom died early on. The remaining three include: Robert P., who would later clerk for his father; Edith W. Stebbins, a graduate of Vassar; and Marguerite W. Robinson. Justice Williams retired in 1912 and died at the age of 82 on January 19, 1925.