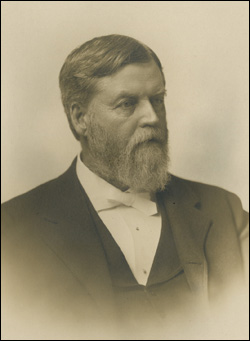 Justice Williams also sat on the bench of the 1st Department; more information can be found HERE.

Pardon C. Williams was born on July 12, 1842 in Ellisberg, Jefferson County, New York, the son of a farmer. He attended public schools in Pierrepont, Belleville Academy, Clinton Liberal Institute, and St. Lawrence University, though he received no degree from the last institution. From 1856 to 1862 he worked as a schoolteacher during the winter months to support his studies. Following his departure from college, he read law in the office of Hammond and Bigelow in Watertown, and was admitted to the bar in October of 1863.

Williams practiced in partnership for the next four years. In 1867 he was elected District Attorney for Jefferson County, a post he held from 1869 to the close of 1874, while maintaining a solitary law practice as well. He formed a new partnership upon relinquishing the office, which he maintained until his election to the Supreme Court for the Fifth District nine years later. He functioned as a trial judge from 1884 until the organization of the Appellate Division in 1896. He sat as an Associate Justice of the First Department throughout 1896 and 1897, after which he was re-assigned to trial work for two years. In 1900, he was dispatched to the Appellate Division for the Fourth Department, on which Court he sat until his term expired at the close of 1911.