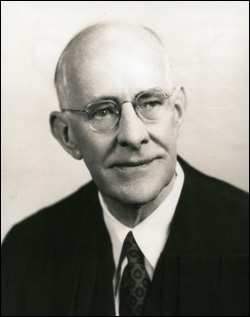 Marsh N. Taylor was born in Newton, Kansas on September 26, 1883. He lived in Salt Lake City until his family moved to Rochester in 1888, where he remained until his death. He attended Rochester’s public schools and the Rochester Free Academy, from which he was graduated in 1901. He briefly attended the University of Rochester (1901-02), thence to Albany Law School where which he received his degree in 1905. He was admitted to the bar in July of that year.

From 1905-10 Taylor practiced privately in a partnership in Rochester. A Republican Party member, he was appointed a Deputy Assistant District Attorney in 1910, was promoted to first Assistant District Attorney by 1920 and remained with the office until the close of 1927. He was twice elected to the State Supreme Court sitting as a trial judge from 1928 to 1937, as an Associate Justice of the Fourth Department from 1937-45, and as Presiding Justice of the Fourth Department from 1945 to his death on August 15, 1953.