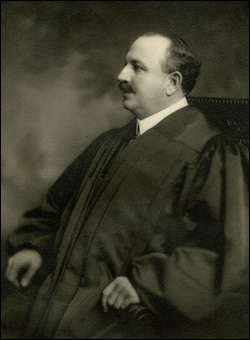 Justice Merrell also sat on the bench of the 1st Department; more information can be found HERE.

Edgar Merrell was born in Lowville, NY on May 21 1865. The son of a lawyer, he received his diplomas from Lowville academy in 1884 and St. Lawrence University in 1887. He then studied law in the office of his father and was admitted to the bar in Syracuse in November 1889. He signed on as a junior partner in his father’s firm where he remained from January of 1890 to the close of 1902.

It was in that latter year that Merrell was elected to the posts of Lewis County Judge and Surrogate, presiding over those courts from 1903 to the close of 1909. In 1909 he was elected a Justice of the Supreme Court for the Fifth District where he sat from 1910 to his mandatory retirement at the close of 1935. His first three years or so were spent as a trial judge. He was then appointed to the Appellate Division for the Fourth Department on May 16, 1913. From there he was shifted to the First Department on May 6, 1918, there to remain until his retirement. He died at Lowville on December 5, 1942.