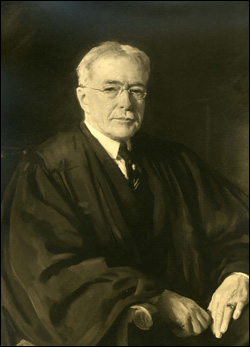 In 1913, Judge Hiscock was elected to the Court of Appeals. See his full biography HERE.

Frank Hiscock was born in Tully, NY on April 16, 1856. His family was affluent and prominent, his uncle being a lawyer and U. S. Senator. He received a degree from Cornell University in 1875 and was admitted to the bar in 1877. He practiced law in Syracuse from that time to his election to the Supreme Court for the Fifth District in 1896, first as a clerk and later as a partner in his father’s firm.

Hiscock’s tenure on the Supreme Court extended from 1897 to the close of 1913. He was elevated to the Appellate Division of the Fourth Department in 1901, where he remained for five years. In January of 1906, he was for all practical purposes removed from the Supreme Court and affixed to the Court of Appeals under special procedures of the State Constitution, an affiancement that was reconfirmed in 1911. He continued, however, to be a Justice of the Supreme Court under law, though he did not function as such, until his election to the Court of Appeals in 1913. He remained an Associate Judge for three years. He was elected Chief Judge in 1916, and held that position until his mandatory retirement at the close of 1926.

His tenure as Chief Judge won praise from the guild for its efficiency. The Court had acquired a backlog of 860 cases by 1918, most arising from the odd economic circumstances during the Great War or from challenges and actions under new regulatory and social legislation. By 1926, the Court had liquidated its backlog while dispatching current business and had done so without the services of additional temporary judges. Following his retirement, Hiscock practiced in partnership for eight years, while putting in three years as President of the State Bar Association. He also acted as an Official Referee from 1927 until his death on July 2, 1946 in Syracuse.