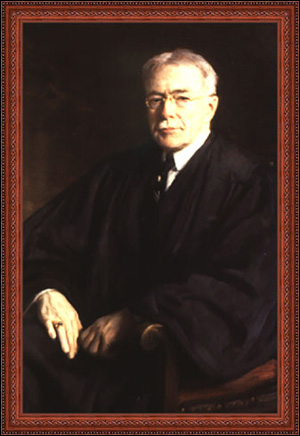 On October 22, 1879, Frank Hiscock and Mary Elizabeth Barnes were married at the Barnes Homestead, 930 James Street in Syracuse. Both were 23 years old. Fifty years later the couple celebrated the event at the same location, which in the ensuing half century had become known as the Hiscock home. The “bride” again wore the same bustle back gown of white satin with its lace frill collar and pleated rouche trimmed stiffened train, flaring from a pearl pendant head fringe embroidered front panel.1

A great deal had happened over the 50 year span. The couple had four children and several grandchildren. Frank Hiscock would become the Chief Judge of the New York Court of Appeals and Chairman of the Board of Cornell University. In the 17 years following his golden wedding anniversary, Judge Hiscock would continue to prosper, passing away at age 90, one of the State’s most accomplished and admired figures.

Frank Harris Hiscock was born on April 16, 1856 in Tully, Onondaga County, New York, the son of Luther Harris Hiscock (1824-1868) and Lucy Bridgman. Hiscock’s father was a Syracuse lawyer and a delegate to the 1867 New York State Constitutional Convention. His grandfather, Richard Hiscock, fought in the Revolutionary War.

Young Frank showed academic promise, graduating from Cornell with high honors in 1875 when he was only 19. He obtained his law degree from Columbia. Two years later, he was admitted to the bar and began law practice in Syracuse with his uncle Frank, the firm being called Hiscock, Doheny & Hiscock. His rise in the profession and the community was swift, but always in tandem with his long and felicitous association with Cornell. In 1889 he was elected to Cornell’s Board of Trustees and in 1896 Governor Levi P. Morton appointed him to the Supreme Court, Fifth Judicial District.2 Later that year, as a Republican, he was elected for a full term. On January 4, 1900, Governor Theodore Roosevelt named him to the Appellate Division, Fourth Department,3 where he served until 1906.

Appointed by Governor Frank W. Higgins as a Supreme Court Justice (Appellate Division) on the Court of Appeals, Judge Hiscock served ex officio from 1906 through 1912. In 1912 he was defeated for a seat on the court4 (William H. Cuddeback and John W. Hogan were elected) but won in 1913. He was elected Chief Judge in 1916 and served in that capacity until his retirement from the court in 1926. His decade as chief was no ordinary one. The structure and administrative conditions of the court, exacerbated by demands made upon it in a growing commercial and industrial era, left it with a backlog of 1400 cases in 1917. By 1923 the backlog was eliminated.5

This illustrated not only Chief Hiscock’s remarkable administrative skills but the respect and affection his colleagues must have had for him in subscribing to his leadership and initiatives. He was well honored on his retirement.6 Vigorous at 70, Judge Hiscock continued to thrive and, three years later in 1929, was elected President of the New York State Bar Association and again for the following year and the year after that. His bar association speeches, always geared toward improvement of the law and its processes, were models of high-mindedness and modesty. Unfailingly, he would praise others for their help.

Through his 70’s and 80’s Judge Hiscock remained active in judicial affairs, serving as Court of Appeals Referee, and in civic and community roles, including the vice-presidency of the Layman’s League of his (Unitarian) church. In recognition of his public service he was awarded honorary degrees by Williams College, Columbia University, and Syracuse University.

In 1928, at age 72, he spoke out against raising standards of the Bar so high that it would become a closed guild of intellectuals and keep out those other valued qualities. “‘A phi beta kappa key,’ he said, ‘does not mean that the young university graduate will become a good lawyer.'”7 At 74, he was chosen as permanent chairman of the Republican State Convention,8 and at 76, strongly and publicly endorsed Judge Charles B. Sears for the Court of Appeals.9

Two months before his death, Judge Hiscock resigned from the Cornell Board of Trustees after almost half a century of service, 22 as Chairman, from 1917 to 193810. The University accepted his resignation effective April 16, 1946, his 90th birthday.

Judge Hiscock’s jurisprudence shows him to have been both a product and a leader of his times. In 1927, shortly after Judge Hiscock’s retirement from the Court, Judge Leonard Crouch (Court of Appeals 1932-1936) described the period from the 1890s through the 1920s, not surprisingly, as one of social and economic changes leading to groundbreaking legal shifts, shifts in which Judge Hiscock played an integral role.11 Judge Hiscock began his time on the Court with the doctrinaire legal philosophy common to his generation — and evidenced by his 1907 vote with the majority in People v. Williams,12 a case in which the Court, on freedom of contract grounds, overturned a statute limiting women factory workers’ hours.

By 1915, however, Judge Hiscock would write one opinion for the Court sustaining a similar regulation as a reasonable exercise of the state’s police powers,13 and another, based on similar reasoning, upholding a statute requiring certain employers to provide workers with a day of rest a week.14 While People v. Schweinler Press,15 the women workers’ hours case, will likely strike the reader as sexist, it was quite a bold move forward for its time. Likewise, Judge Hiscock’s reasoning in Klinck Packing,16 the day-of-rest case, made it clear that the Legislature’s power to regulate employment in the interest of public health was the issue, not religion. At the time, in order to come to such conclusions in these and similar cases, it was necessary to distinguish the infamous Lochner v. New York,17 in which the United States Supreme Court subordinated the States’ benevolent police powers in favor of private contracts.

On a similar vein, Matter of Wulfsohn v. Burden,18 which Judge Hiscock wrote in 1926, firmly established the Legislature’s ability to authorize local zoning regulations as well as local governments’ power to promulgate and enforce them. On the domestic relations front, however, Judge Hiscock also authored Hawkins v. Hawkins,19 in which the Court refused to grant a divorce to mutually adulterous spouses on the theory that the wrongdoers deserved one another. Thus, some of Judge Hiscock’s writings reflect the more old-fashioned attitudes of the time (notably, the relative physical weakness of women was a part of his reasoning in Schweinler Press). However, for a Judge on the bench during a period of great transition, this may simply reflect a “disposition to be progressive, but to be so cautiously.”20

After a career filled with public service in the law and in education, Judge Hiscock died on July 2, 1946, in Syracuse. The obituaries reflect the extraordinary esteem in which he was held. They speak of his singular accomplishments and convey the impression that his natural endowments and family ties gave him opportunities and he made the most of them. The obituaries and biographical accounts, however, omit a shocking event that must have had a profound influence on him. Perhaps because of journalistic etiquette of the day, or the wish to spare Judge Hiscock unnecessary anguish, no mention is made of the circumstances surrounding his father’s death.

When young Frank was eleven, his father Luther Harris Hiscock, a Syracuse lawyer, was shot to death by General George W. Cole. The shooting took place on June 4, 1867 in the public reception room of Stanwix Hall, a prominent hotel in Albany.21 In front of a host of witnesses, General Cole fired at close range, saying that Hiscock “violated my wife while I was at the war; the evidence is clear, I have the proof.” At the time, the event was momentous and widely reported, owing to the prominence of the parties. The case, which resulted in two trials – the first a hung jury and the second an acquittal by reason of momentary insanity – was the subject of several books and articles.

Judge Hiscock’s legacy lives on in Onondaga County. Today, in Syracuse, the Legal Aid Society bears his name. The Society was founded in 1949. Initial funding was provided by the Syracuse Foundation, Inc. from a bequest of Judge Hiscock. The Frank H. Hiscock Legal Aid Society is “[d]edicated to the principle that no one in Onondaga County shall be denied justice because of a lack of means.”

Judge Hiscock and his wife Mary Elizabeth, who died on April 17, 1937, at age 80, had four children: Rebecca Cornelia (1880-1896), Helen Lucy (1882-1978), George Barnes (1890-1975), and Luther Harris (1893-1975). Helen Lucy married William Eager; the couple had no children. George Barnes Hiscock married Genevieve Saxer and had two children: Henrietta Hiscock Gottschalk (1910- ) and Frank Hiscock II (1919- ), both of Skaneateles. Luther Hiscock married Dorothy Neal and was the father of Reba M. Hiscock Pierce (1920-1997) and Allie Hiscock Laupheimer (1922-1996). There are many offspring, descending five generations after the judge. The family historians, so to speak, are Robert Maguire and his wife, Diane Hopkins Pierce, who supplied a great deal of the family information for this volume. Robert Maguire is the great-grandson of Judge Hiscock, the son of Reba M. Hiscock and her husband John Sells Pierce. The Maguires live in Bonita Springs, Florida.

The Onondaga County Historical Society, whom we thank for their help, has five boxes of papers and materials relating to Judge Hiscock.