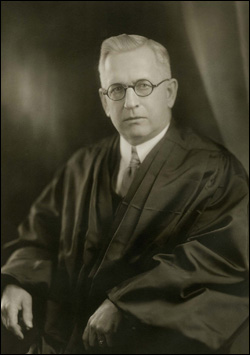 In 1928, Judge Hubbs was elected to the Court of Appeals. See his full biography HERE.

Irving G. Hubbs was born November 18, 1870 at Sandy Creek, Oswego County, New York. He is the son of George L. Hubbs and Catherine Snyder Hubbs. He graduated from Pulaski Academy in 1887 and Cornell Law School in 1891 (L.L.B.), being admitted to the bar in the latter year. He practiced alone in Pulaski and Parish from 1891-1911. On January 3, 1893 he married Nancy C. Dixson of Pulaski, New York and they had two daughters: Florence Dixson White and Marian Elizabeth Graham. Hubbs was nominated and elected to the Supreme Court for the Fifth District in 1911, holding forth as a trial judge from 1912 to May of 1918. He sat as an Associate Justice of the Appellate Division for the Fourth Department from May 1918 to the close of 1922, and as Presiding Justice by Governor Miller’s designation from that time until the end of 1928. On November 6th of the latter year he was elected to the State Court of Appeals, replacing Hon. William S. Andrews who retired at the end of 1928. Hubbs remained with the Court of Appeals until his resignation on December 31, 1939. He returned to private practice for five years, fully retiring in 1945. He died on July 22, 1952.