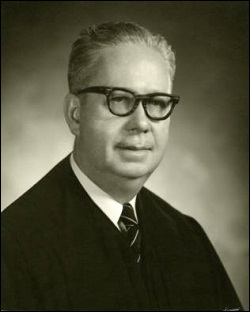 Reid S. Moule was born on April 14, 1908. Justice Moule received his LL.B from the State University of New York at Buffalo Law School. He was admitted to practice on June 29, 1932. Following law school, he practiced law in Buffalo eventually associating with Alger A. Williams who later became Presiding Justice of this Court. He was elected to the Supreme Court in November of 1958, appointed as Supervising Justice of the Conciliation Bureau in 1967 and was named Administrative Judge for the Eighth Judicial District. Justice Moule was designated as an Associate Justice to the Appellate Division commencing January 1, 1969. He served on the Court until his retirement in December 1984, and thereafter he became a judicial administrative officer for the Appellate Division’s Preargument Program in January 1985, a position which he held until February 1994. Justice Moule died on March 31, 1995.