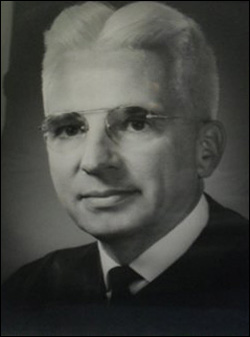 Justice Witmer also sat on the bench of the 1st Department; more information can be found HERE.

G. Robert Witmer, was born in Webster, New York on December 26, 1904. He graduated from Harvard Law School in 1929 and was admitted to practice that same year. He practiced law in Rochester for a short time and then opened a law office forming a partnership with William G. Easton. In 1933, he became Town Attorney for the Town of Webster and held that office for 10 years. In 1945, he was elected as Monroe County Surrogate and served in that position until December 31, 1953. In 1953, he was elected to the Supreme Court. He served as Administrative Judge for the Seventh Judicial District from 1962 to 1968. In addition, he was designated on a part-time basis to the Appellate Division, First Department from 1963 to 1967. He was designated as an Associate Justice of this Court in 1967 and served in this capacity until 1980. During his term with the Court, he was co-chairman of the Practitioner’s Handbook on Appeals and was a charter member of the Pattern Jury Instructions Committee between 1962 and 1987. He also served temporarily on the Court of Appeals in 1974 for one term. Following his retirement from the Court in 1980, Justice Witmer was appointed as a Judicial Administrative Officer and was in charge of the Pre-Argument Program until his retirement in 1984.