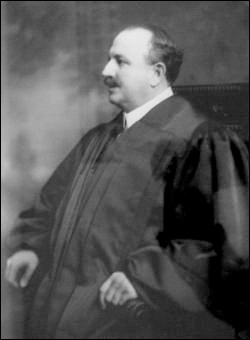 Justice Merrell also sat on the bench of the 4th Department; more information can be found HERE.

Edgar Sanford Keen Merrell was born in Lowville, New York on May 21, 1865. He attended Lowville Academy, graduating in 1884, and graduated from St. Lawrence University in 1887. After graduation he studied law at Merrell & Ryel, his father’s law firm. Admission to the Bar followed in 1889. He started practicing law as a junior partner in Merrell, Ryel & Merrell, which later became Ryel & Merrell after his father’s death in 1890.

Mr. Merrell started his judicial career as county judge and surrogate of Lewis County from 1902 through 1909. He was elected to a full 14-year term as a Supreme Court Justice in the 5th Judicial District in 1910. He was reelected to another full term in 1923. Governor Sulzer designated him to the Appellate Division Fourth Department in 1913, where he sat until 1918, at which time Governor Whitman designated him to the Appellate Division First Department. He remained there until his mandatory retirement at age 70 in 1935.