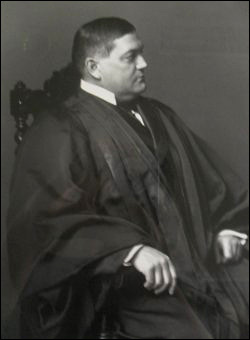 In 1917, Judge McLaughlin was appointed, and later elected, to the Court of Appeals. See his full biography HERE.

It was written about Chester B. McLaughlin that “Courage and independence were perhaps the dominant qualities that shone forth in the man himself and in his service to the State.” (In Memoriam, 250 NY 633, 622 [1929].)

Chester Bentine McLaughlin was born on February 10, 1856 in Moriah, New York. He attended Sherman Academy and graduated from the University of Vermont in 1879. He went on to study law with B.B. Bishop at the firm of Waldo, Tobey & Grover and was admitted to the Bar in 1881. He then went into private practice.

McLaughlin served as chairman of the Essex Republican County Committee from 1887-88 and was school commissioner for the Second District, Essex County, from 1882-1888. He was county judge and surrogate of Essex County from 1891-1896. In 1888, he was elected as a delegate to the Constitutional Convention of 1894, where he was chair of the Committee on Counties, Town and Villages, Their Organization and Government. He was one of three chief advocates for a constitional amendment to enable the enlargement and improvement of New York’s canals.

In 1896 Justice McLaughlin resigned as county judge and was elected to the Supreme Court, Fourth Judicial District, an office he held until 1898 when he was designated by Governor Frank S. Black to sit in the Appellate Division First Department. He spent 19 years on that bench and resigned in 1917 upon his appointment by Governor Whitman as an associate judge of the Court of Appeals, filling a vacancy created by the election of Judge Frank H. Hiscock as chief judge. He was later elected for a full term on that court. When Justice McLaughlin reached the constitutional age limit in 1926, he retired from the Court of Appeals and resumed the practice of law with his son, Chester B. Jr.

McLaughlin was married to Lucy Warner McLaughlin with whom he had three sons, Warner, Chester B. Jr., and Donald G. He passed away on May 12, 1929 at the age of 74.

The Judges of the New York Court of Appeals, Albert M. Rosenblatt [ed.], The Historical Society of the Courts of the State of New York, New York, 2007, p. 419.