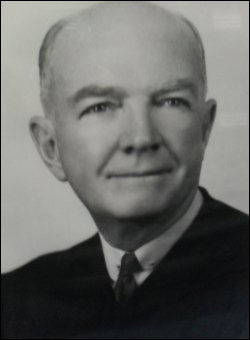 James B.M. McNally was born in Jersey City, New Jersey on April 5, 1896. He graduated from St. John’s University in 1917 and received his law degree from Fordham Law School. He served in the Army during World War I and was commandant of a Coast Guard school in World War II. He was awarded honorary Doctor of Law degrees from St. John’s, Manhattan College and Fordham University.

From 1920 to 1943, McNally was a trial lawyer in New York City, and was a member of the original faculty of St. John’s University School of Law from 1925 through 1938. He was a member of the State Constitutional Convention of 1938, and some of his proposals have been written into the Constitution. In addition, he was chairman of the law committee of Tammany Hall.

McNally was appointed United States Attorney for the Southern District of New York in 1943 by President Roosevelt. He remained there until 1944. The following year he was elected to the Supreme Court First Department, where he served for 12 years. During that time he served as chairman of the Board of Justices for the Supreme Court, First Department (1954-1956). In that capacity he functioned as the administrative head of the court as well as its spokesman. In 1957, McNally was appointed to the Appellate Division First Department by Governor Averell Harriman. He remained there until his retirement in 1972.