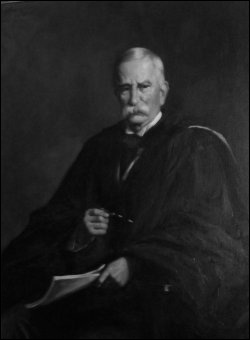 George Landon Ingraham was one of the first Associate Justices of the Appellate Division First Department at its formation in 1896. He became Presiding Justice in 1910 and remained on the bench until his retirement in 1915. While there, he earned a reputation for being one of the most impartial jurists of the state. (New York Times, January 25, 1931.) He was a staunch advocate for court reform.

Born in New York City on August 1, 1847 to Supreme Court Justice Daniel Phoenix Ingraham and Mary Landon Ingraham, he attended Williams College and Columbia University Law School, from which he graduated in 1869, the same year he was admitted to the Bar. He then began a lucrative law practice.

At age 36, Justice Ingraham was appointed — and later that year elected — as judge of the Superior Court of New York City. He left in 1891 when he was elected to the Supreme Court bench. Following that he was designated an Associate Justice of the Appellate Division First Department in 1896 where he remained until 1915. During Ingraham’s term on that bench, he incurred the wrath of Tammany Hall when voting against their candidate for Commissioner of Jurors. Upon his retirement, he partnered with William F. Sheehan and Samuel F. Moran to form Ingraham, Sheehan & Moran.

After leaving the bench, Justice Ingraham remained very active in his roles as Director of Equitable Life Assurance Society of U.S., president of the Association of the Bar of the City of New York (1917-1918), Chairman of the District Appeals Draft Board, official referee of the 1st Judicial District of Supreme Court, and vice president of New York Law Institute.

He was married in 1873 to Georgina Lent Ingraham and had a son, Supreme Court Justice Phoenix Ingraham, and a daughter, Mme. Claude Dutreil. Justice Ingraham passed away at age 83 on January 24, 1931.