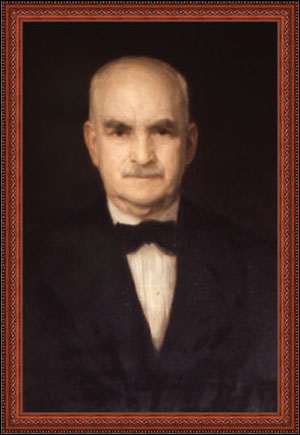 In an extraordinary career spanning more than six decades, Judge Frederick Collin devoted himself to the law and to the betterment of the community in which he lived. An exemplary judge, a true “lawyer’s lawyer” and a devoted public servant whose tenure as Mayor of Elmira was among the most celebrated in that city’s history, Collin enjoyed the respect of both the bench and bar and the esteem of the greater community in which he worked and lived. Judge Collin was born on a farm in Benton, Yates County, New York in 1850, one of eight children born to Henry Clark Collin and Maria Louise Park. Collin came from a prominent family with deep routes in colonial New England. Fleeing the religious and political persecution which culminated in the revocation of the Edict of Nantes, Henry Clark Collin’s French Huguenot ancestors left France in 1683 for Dublin, Ireland, and, two years later, emigrated to New England. Maria Louise Park’s ancestors were among the oldest of English colonists in Connecticut. Her older brother, Rev. Roswell Park, D.D., was the founder and first president of Racine College. His son (and Judge Collin’s cousin) was Roswell Park, M.D., the distinguished surgeon and bacteriologist.

After completing his early education in the local public schools, young Collin attended Penn Yan Academy, where he studied under Dr. Robert P. Bush. Many years later when Dr. Bush ran for the New York State Assembly, he placed Collin’s name in nomination for the Court of Appeals at the Democratic Party’s 1910 nominating convention. Collin also received private instruction from his older brother, Charles Avery Collin, a Yale graduate and successful attorney whose distinguished career would include serving on the first faculty of the Cornell Law School, as a legal advisor to Governors David B. Hill and Roswell P. Flower and as a member of the Statutory Revision Commission.

Collin shared his brother’s passion for scholarship and matriculated at Yale, from which he graduated in 1871. During his years at Yale, Collin was a member of Delta Kappa Epsilon, Skull and Bones, and the Wooden Spoon Society. He was popular with his classmates, no doubt due to his sweet nature, quick wit, and personal charm. In 1872, having not yet decided the vocation he wished to pursue, Collin returned to his family’s farm in Benton, where he worked for about a year. It was during this period that Collin developed an interest in the law. His brother Charles, by then a practicing attorney in Elmira, sent Collin a copy of Blackstone’s Commentaries and several other venerable tomes, into which Collin immersed himself. Soon thereafter, Collin decided he wished to practice law. In pursuit of this goal, he moved to Elmira in 1873, initially studying with Charles. Six months later, Collin became a law clerk in the law office of John A. Reynolds, a prominent Elmira attorney.

Collin dutifully applied himself, mastering fundamental principles and the art of writing. In 1876, at the age of 26, Collin was admitted to the bar and became a partner in his mentor’s law firm. Over the ensuing decade, Collin developed a sterling reputation for his legal acumen. In 1885, John B. Stanchfield, a successful trial attorney, joined the firm after his law partner, David B. Hill, was elected Governor of New York. Each partner occupied a distinct role within the firm. Reynolds principally managed the business aspects of the practice; Stanchfield, with his dramatic flair, was the consummate trial lawyer; and Collin was the most often to furnish the law and handle complex legal matters. Collin developed a particular expertise in the areas of corporate law and municipal law, and often appeared in the State’s appellate courts. As the Elmira Star Gazette later recounted, Collin’s “complete understanding of the fundamental principles of the law plus his exceptional ability to enunciate his beliefs before appellate courts was in no small way responsible for the immediate success” of Reynolds, Stanchfield and Collin.1

During this period, even as he managed a busy and challenging practice, Collin devoted significant time and energy to public service and to the betterment of the community in which he lived. In 1886, the City of Elmira Common Council appointed him to the Board of Education, where he would serve for two decades, and as its President in 1890. Collin also served as corporation counsel between 1891 and 1892. In 1892, he ran unsuccessfully for mayor on the Democratic line. Undeterred by the defeat, Collin ran again in 1894, this time winning. Though actively involved in the Democratic Party, Collin earned the respect and goodwill of citizens of all political persuasions and, in 1896, won reelection to a second term as Mayor.

During his two terms in municipal office, Collin reformed the City Charter, created a City Court and a Board of Public Works, and oversaw the laying of modern, uniform city streets and the erection of a new City Hall. Collin declined to seek a third term in 1898, instead choosing to return to the helm of the Board of Education. Under his leadership as President of the Board, three new schools were constructed and higher educational standards were established. He served as Board President until October 1910, when then-Governor Charles Evans Hughes appointed him as an Associate Judge of the New York Court of Appeals, to fill the vacancy caused by the death of Judge Edward T. Bartlett. The very next month, Collin was elected to a 14-year term, receiving the endorsement of both the Democratic and Republican parties.

Though he came to the bench with no prior judicial experience, Collin’s broad and deep knowledge of the law and abundant experience in public service and as a practicing attorney well prepared him for the challenge. Collin served on the court for ten years, enjoying the great respect of both his colleagues on the Court and the attorneys who appeared before him. His opinions can be found in Volumes 200 through 230, inclusive, of the New York Reports. On the bench, he was known for his intellectual rigor, unwavering fairness, even temperament, and personal warmth. He possessed a unique perspicacity and a gift for getting to the bottom of complicated issues. His writing was crisp and cogent, reflecting a polished literary style. Among his most celebrated decisions is Manson v. Curtis (223 NY 313 [1918] [invalidating stockholders’ agreement purporting to abrogate control and authority over corporate affairs vested in the board of directors]).

Despite his formidable intellect and personal accomplishments, Collin remained approachable and enjoyed a reputation for being unfailingly kind and courteous to everyone he met. He abhorred superficiality, pomposity, and pretension, preferring to avoid the limelight. His quick wit, lively sense of humor, and warm, generous spirit endeared him to his colleagues on the Court, who included such illustrious jurists as Frederick E. Crane, Frank H. Hiscock, Benjamin N. Cardozo, Nathan L. Miller, and William S. Andrews. During his tenure on the Court, Collin also sat on the Court of Impeachment of Governor William Sulzer, whom he voted to convict.

Collin retired from the bench in December 1920, at the height of his ability, having reached the constitutional age limitation in August of that year. His retirement was viewed as a great loss to the Court, as he was in his prime and still capable of many years of exemplary service.2 Judge Collin later wrote in 1938, nearly 18 years after he retired from the bench on account of age-that he believed the mandatory retirement age could “safely and perhaps beneficially be increased to seventy-three (preferably) or seventy-five years.”3

Upon his retirement from the Court, Collin returned to the private practice of law in his beloved Elmira, entering into partnership with the successors of the firm he helped found, which had become one of the Southern Tier’s pre-eminent law firms. By then in his 70s, Collin continued to maintain a diverse, challenging practice and served as an official referee for the Court of Appeals. He was actively involved in the New York State Bar Association, and was elected Vice President for the Sixth Judicial District in 1926. At the same time, he invested significant energy in commerce and the arts. Collin served on the Board of Directors of the Delaware, Lackawanna & Western Railroad, and was a director and counsel to the Chemung Canal Trust Company. He also served as president of the Arnot Art Gallery (now the Arnot Art Museum) from 1911 until his death in 1939. As the personal lawyer to Matthias H. Arnot, he set up the trust fund which maintains the art gallery. Collin was also a charter member of the Elmira City Club, the Century Club, and the Country Club.

Shortly before his 80th birthday, Collin successfully defended the Glen Alden Coal Company of Scranton, Pennsylvania in a multimillion-dollar lawsuit brought by a Binghamton woman. His brother, Charles, a masterful advocate in his own right, represented the plaintiff. Contemporaneous accounts describe the two gifted attorneys expertly doing battle in court and then merrily strolling off to dine together.4

Judge Collin married three times, each time surviving his spouse. He married Mary Palmer Yates in 1877, who died in 1887. In 1900, he married Alice Atwater Bacon, who died in 1917. Finally, he married Margaret Fell Halloch in 1918. Having no children of his own, he lavished attention of his nieces and nephews. He remained physically active and intellectually engaged until his death in 1939, at the age of 89. Collin attributed his longevity and excellent health to a daily exercise regime which included walking to and from his office each day. Collin also maintained a summer home on his family’s farm in Benton, where he spent each summer tending to his extensive rose gardens.

As observed in the minutes of the New York Court of Appeals upon Judge Collin’s death,

“A judge’s fame is transitory. His opinions are more enduring. In Judge COLLIN’s case they are an index to his attainments and intellectual honesty, but they do not display the sweetness of his nature, which revealed itself on the slightest acquaintance.”5

Judge Collin had no children.

Burdick, SELECTED CASES ON THE LAW OF PARTNERSHIP: INCLUDING LIMITED PARTNERSHIPS (Little, Brown and Company 1898).

Hepburn, A SELECTION OF CASES AND STATUTES ON THE PRINCIPLES OF CODE PLEADING (W.H. Anderson and Company 1901).

Sayles & Evans: History of the Firm at http://www.saylesevans.com/history.html.

“There shall be a Court of Appeals . . .”at http://www.courts.state.ny.us/history/elecbook/thereshallbe/pg99.htm.

We are unaware of any published writings of Judge Collin, beyond his written decisions.