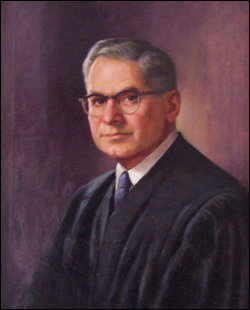 Harry D. Goldman was born on March 27, 1903 in Rome, New York. He received his LL.B from Brooklyn Law School and was admitted to practice in 1931. He practiced law in Rochester and became a partner in the law firm of Goldstein, Goldman and Goldman. He was elected to the Supreme Court in 1956 and appointed to this Court as an Associate Justice in 1967 by Governor Averill Harriman. He was appointed Presiding Justice in 1968 by Governor Rockefeller and served in that capacity until he reached the age of 70 in 1973. Thereafter, he was certified as a retired Supreme Court Justice and re-designated to the Court as an additional Associate Justice. He retired from the bench in 1977 having served on the Court for 21 years, the second longest tenure of any Justice, and returned to the practice of law with his former law firm. Additionally, Justice Goldman was elected as President of the New York State Supreme Court Justice’s Association in 1963 and, for many years was a member of the Executive Committee of the United Community Chest. Justice Goldman received many honors and awards during his career including the Root-Stimson award for outstanding community service from the State Bar Association and the 1966 Kiwanis Club Citizen of the Year Award. Justice Goldman died on September 21, 1995.