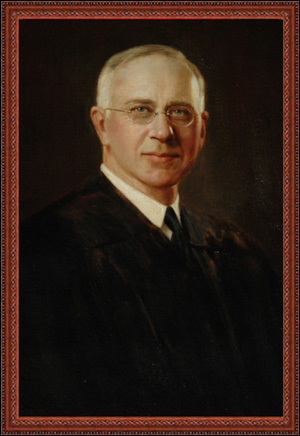 Judge Leonard C. Crouch’s tenure on the Court of Appeals was relatively brief: only four years. Nevertheless, his “opinions as a judicial officer of this State are an enduring contribution to our jurisprudence.”1

Leonard Callender Crouch was born July 30, 1866, in Kingston, New York, to Henry Gage Crouch and Almira Callender Crouch. He remembered his father, a newspaper owner and publisher, as “a whole-souled Democrat, a follower of Douglas, and a member of his party when he traveled about the country to debate with Lincoln.”2 Judge Crouch acquired his father’s passion for politics and democratic principles “by inhalation.”3 Yet this lifelong Democrat refused to be categorized as a liberal or conservative.

All I can say . . . is I don’t believe you can pin that kind of tag on me. I am liberal about some things and conservative about others. I don’t think we can throw away everything we have because it doesn’t work perfectly, nor do I think we should hesitate to improve it merely because we have had it a long time.

You know, this fashion of classifying judges as liberal or conservative started when Justice Holmes went into the [S]upreme [C]ourt. He declared that he felt the legislatures were the proper source of action on matters affecting social welfare, and that the judiciary should be slow to deny the constitutionality of anything they originated in that line. The viewpoint was considered revolutionary then, and the public was quick to hail it as evidence of a new liberality on the bench. I think it is unfairly applied in most cases, because you can’t separate many judges into two different classes like that.4

As a boy, Leonard Crouch would spend time around his father’s newspaper printing shop, the Kingston Argus, and he worked there before attending college. He became a qualified printer and was publisher of the Argus for a time after his father’s death. In 1889, he was graduated Phi Beta Kappa from Cornell University, and attended one year at its Law School. He completed his legal education at Syracuse University, was admitted to the New York bar in 1891, and launched his legal career in Kingston working at the Eastern Building and Loan Association.

In 1895, Crouch married Anne Laura Paine of Troy, Pennsylvania, and shortly thereafter joined the Industrial Savings and Loan Association in Syracuse. A few years later, he formed a partnership with Albert P. Fowler and Irving D. Vann, son of Court of Appeals Associate Judge Irving G. Vann5, and continued in the practice of law until 1913, when Governor William Sulzer appointed Crouch to fill a vacancy on the State Supreme Court.

In 1923, “the fine quality of judicial workmanship for which he was noted”6: together with a year of teaching at the Syracuse University School of Law, prompted Governor Alfred E. Smith to name Judge Crouch to the Appellate Division, Fourth Department. While serving on the Appellate Division, he continued his ties to the academy, appearing as a guest lecturer at both Cornell and Syracuse Universities. In 1928, as the Democratic nominee for the Court of Appeals, he was defeated by Irving G. Hubbs, whom he later joined on the Court. In June 1931, Syracuse University awarded Judge Crouch an honorary doctorate.

Judge Crouch’s outstanding reputation as a legal scholar attracted the attention of Governor Franklin D. Roosevelt, who in 1932 appointed him to fill the vacancy created by Court of Appeals Judge Cuthbert W. Pound‘s appointment as Chief Judge. That seat was left vacant due to Chief Judge Benjamin N. Cardozo‘s selection for the United States Supreme Court. In 1934, Judge Crouch was elected to a full term on the Court of Appeals. Among Judge Crouch’s numerous decisions for the Court was Matter of New York City Hous. Auth. v. Muller (270 NY 333 [1936]), the first judicial holding in the United States to establish public housing as a public use for purposes of eminent domain7 – and Clark v. Dodge (269 NY 410 [1936]), dealing with shareholder agreements.

Judge Crouch retired from the Court of Appeals on December 31, 1936, at age 70, but continued to make significant contributions. After leaving the bench, he served as an Official Referee in the Court until March 1940, bringing to a close his 27-year stellar career on the bench. From the time of his own law school graduation, Judge Crouch aspired to teach at a law school. Throughout his career as a judge he made time to teach and lecture, especially in the area of appellate practice. Between 1939 and 1941, he returned to academia as a visiting professor at Cornell University, teaching a course on problems in appellate practice to third-year law students.8

Judge Crouch was, after 1941, appointed to one of the New York State Alien Enemy Hearing Boards.9 During World War II, United States Attorney General Francis Biddle authorized the formation of such enemy alien boards to determine how to handle thousands of enemy aliens arrested nationwide since the beginning of the war.10 The potential determinations included unconditional release, parole, or internment for the duration of the war. In 1944, Judge Crouch sat on a five-person committee of the State Bar Association formed to investigate alleged crimes in the administration of justice in Albany County.11

Judge Crouch died at the age of 86 on July 2, 1953 of a heart ailment while residing with his daughter, Helen (Mrs. Joseph U. Douglass), in Falls Church, Virginia. He is buried in Oakwood Cemetery in Syracuse, New York.12 In his memorial tribute to Judge Crouch, Chief Judge Lewis praised both his judicial qualities of “a disciplined mind, legal scholarship of first rank, sound judgment and a reasoned respect for judicial precedent”; and Judge Crouch’s personal qualities as an “indefatigable collaborator” possessed of integrity of character.13

Address To Judge Leonard C. Crouch Upon His Retirement From The Court of Appeals, 272 NY (1936).