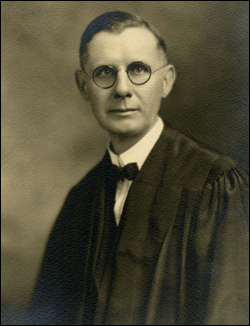 Harley N. Crosby was born on June 25, 1873 in Parish, Oswego County, New York, the son of a farmer and political functionary who served as Town Assessor. Young Crosby attended public school and later Parish Academy, from which he graduated in 1891. He worked in lumber camps as a repairman for the West Shore Railroad in Frankfort (1891-92), then won a scholarship to Cornell University from which he received a Bachelorís Degree in 1896 and a law degree in 1897. He was then employed as a clerk to Obed Edson in Sinclairville. In 1898 he was admitted to the bar and began a practice in partnership in Falconer.

Over the next eight years he held posts of Village Clerk, School Commissioner, and Supervisor of the Town of Ellicott, where the Village of Falconer is located. In 1906 he was appointed Surrogate of Chautauqua County, a post to which he was elected three times and where he remained until the close of 1921. He was also a member of the Chautauqua County Draft Board (1917-18).

Crosby was twice elected to the Supreme Court for the Eighth Judical District, holding office from 1922 to his enforced retirement at the close of 1943. He sat on the Appellate Division Fourth Department from January 1929 onward, holding the post of Presiding Justice from January of 1940 until his retirement. In addition, he was temporarily appointed to the Court of Appeals in November and December of 1943.

Besides his legal career, the Judge was an intellectual with many other interests. He was a member of the Chautauqua Literary & Scientific Circle, which billed itself the oldest book club in America. He was also a Shakespeare aficionado, and taught Methodist Bible classes.

After his retirement, Crosby remained active in Falconer society. He died on April 26, 1955.