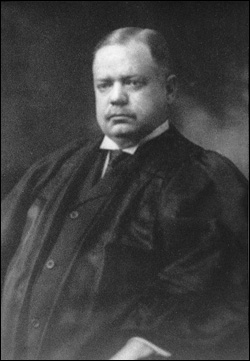 Justice Woodward also sat on the bench of the 2nd Department; more information can be found HERE.

Justice John M. Woodward was born on August 19, 1959, at Charlotte Center in Chautauqua County. During his youth, Justice Woodward’s family lived in Michigan and then Kansas. His father died in Kansas in 1870. He was educated at the Fredonia State Normal School in 1878 and commenced the study of law with the Fredonia firm, Morris & Lambert. He graduated from New York University Law School in 1881. He began practice in Jamestown in 1881 with William Sessions. He was Jamestown’s first city attorney from 1886 to 1889, member of the Chautauqua County Board of Supervisors from 1887 to 1892, and Chautauqua County District Attorney from 1892 to the end of 1895. He was appointed to the Supreme Court in January 1896 by Gov. Morton to fill a vacancy. He was elected to a full term that year and re-elected in 1910. He served on the Appellate Division, Second Department, from 1898 to 1913, and on the Third Department from 1913 until February 1, 1922. He resigned from the bench to resume the practice of law. He died on June 1, 1923 in Atlantic City. The Woodwards lived in Massachusetts in Colonial and Revolutionary times and Justice Woodward’s great-grandfather was a soldier in the Revolutionary War, serving in a Massachusetts regiment. On his mother’s side, Justice Woodward was a lineal descendant of the Cotton Mather family. Justice Woodward’s grandfather served in the New York State Assembly in 1835, representing Chautauqua County. Justice Woodward’s wife was the daughter of a Supreme Court Justice, Hon. George Barker.