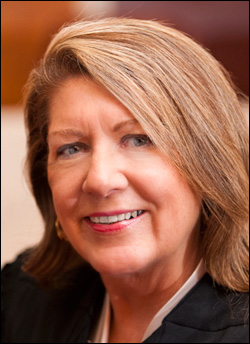 Justice Peters’ judicial career began in 1983 when she was elected to serve as an Ulster
County Family Court Judge. She remained on the Family Court bench until 1992, when she
was elected as the first woman Supreme Court Justice in the Third Department. Subsequently,
on February 3, 1994, Justice Peters was appointed to the Appellate Division, Third Department
by Governor Mario M. Cuomo and was appointed Presiding Justice of that Court by Governor
Andrew M. Cuomo on April 5, 2012. She was the first woman to have been appointed as the
Presiding Justice of the Appellate Division, Third Department.

An avid supporter of the arts, Justice Peters serves on the Board of Directors of the
Woodstock Byrdcliffe Guild. She is also a member of the Mohonk Preserve and the NAACP.