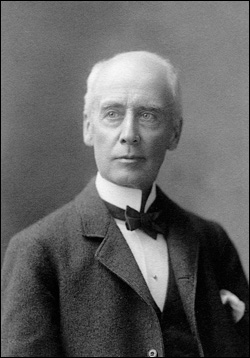 Justice John R. Putnam was born at Putnam Place, the family homestead in Saratoga Springs, New York, and was lineally descended from a John Putnam, an English Puritan who settled in Danvers, Massachusetts, in 1634. Justice Putnam’s grandfather, Gideon Putnam, is described as the virtual creator and originator of Saratoga Springs. Justice Putnam received an academical education in Saratoga Springs, studied law with Hon. Charles S. Lester and Hon. John C. Hulbert, was admitted to the bar, and commenced practice in 1855. In 1875, Justice Putnam entered into a partnership with William H. Eustis, later the Republican candidate for Governor of Minnesota. The partnership was conducted for about eight years under the name of Putnam & Eustis. Afterwards, Justice Putnam associated himself with John L. Henning, under the partnership name Putnam & Henning. Soon after his admission to the bar, Justice Putnam served one term of four years as justice of the peace and also acted for a period as one of the trustees of the village of Saratoga Springs. In the autumn of 1887, Justice Putnam received a nomination for Justice of the Supreme Court of the Fourth Judicial District by both the Republican and Democratic judicial conventions, and was thereafter elected without opposition, his term commencing January 1, 1888, on the termination of that of Hon. Augustus Bockes. For about four years after his term of office commenced, Justice Putnam was engaged in presiding at Circuit Courts and Courts of Oyer and Terminer and Special Terms within his district. In 1891, he was appointed by Governor Hill to the General Term of the Third Department and continued in that position until the adoption of the Constitution of 1894, when he was designated by Governor Morton as one of the justices of the Appellate Division, Third Department. He served on the Appellate Division until September 1899. Justice Putnam married the daughter of an Ohio railroad magnate.