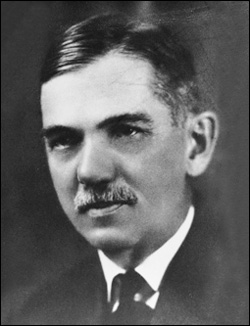 In 1926, Judge Kellogg was elected to the Court of Appeals. See his full biography HERE.

Judge Henry T. Kellogg was born in 1869. He graduated from Harvard Law School in 1892. In 1893, he entered into a law partnership in Plattsburgh with Charles E. Johnson. He was elected county judge of Clinton County in 1902. The next year he was appointed by the Governor to succeed his father, S. Alonzo Kellogg (then serving on the Appellate Division, Third Department), to the Supreme Court for the Fourth Judicial District. Justice S. Alonzo Kellogg had retired because of ill health. He was elected to the Supreme Court seat in 1903 and was re-elected in 1917. Judge Kellogg was designated to the Appellate Division, Third Department, in January 1918, and continued there until his election to the Court of Appeals in 1926, the year that Judge Cardozo became Chief Judge. Judge Kellogg was acting Presiding Justice of the Appellate Division from September 1922 to May 1923, in place of Presiding Justice Van Kirk. He resigned from the Court of Appeals in the spring of 1934 because of ill health. He died at his home in Valcour, near Plattsburgh, at the age of 73 in September 1942.