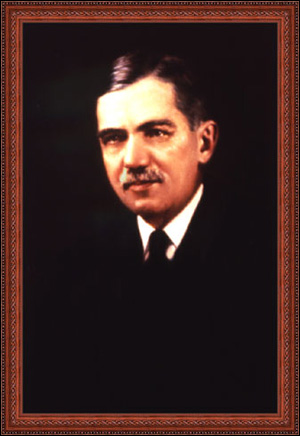 Henry Theodore Kellogg was a distinguished son of Northern New York who continued a family legacy on the bench. Born in Champlain in Clinton County, New York on August 29, 1869, he was the son of Sylvester Alonzo Kellogg, a Plattsburgh lawyer, and Susan Elizabeth (Averill) Kellogg. The Kellogg family was a prominent one in Northern New York, and was said to be descended from Chancellor Kent.1 Henry Kellogg’s father had been justice of the state Supreme Court and also served on the Third Department of the Appellate Division at the designation of Governor Theodore Roosevelt.2 Henry Kellogg’s great-great-grandfather died of exposure and disease as result of participating in Benedict Arnold’s expedition against Québec in 1775.3 The Kelloggs descended from Lieutenant Joseph Kellogg, who before 1651 came to Connecticut from England.4

Henry Kellogg prepared for college at Vermont Episcopal Institute5 and Rock Point Military Academy6 in Burlington, Vermont, and then attended Harvard, graduating cum laude in 1889, a member of Phi Beta Kappa, with the degree A.B. He received an LL.B. from Harvard Law School three years later in 1892 and returned home to Plattsburgh where he entered into a law practice in his father’s law office, the firm of Kellogg, Weed and Palmer. He then became a law partner of Judge L.L. Shedden and was also associated with Charles E. Johnson. He practiced until elected county judge in Clinton County in 1903. From 1898 to 1903, Kellogg also served as a referee in bankruptcy. On March 5, 1903, Judge Kellogg married Plattsburgh resident Katherine Miller Standish Weed, the daughter of Smith Mead Weed, an attorney.7 Colleagues reported that they lived a “notably happy married life,” but there are no reports of progeny.8

Kellogg resigned from county court after less than six months of service when, on June 25, 1903, Governor Benjamin B. Odell, Jr. appointed him justice of the Supreme Court, Fourth District.9 Kellogg’s father previously held the Supreme Court seat, and the New York Times reported that the father resigned from the post early – his term did not expire until December 31, 1904 – in the hope that his son would be his successor.10 The younger Kellogg was elected to Supreme Court in November 1903 and then reelected in 1917 for a second term ending in 1931. He served on the trial bench until his appointment to the Third Department of the Appellate Division on January 1, 1918. Kellogg has been credited with making the Workmen’s Compensation Law workable through his jurisprudence on the subject while a justice of the Appellate Division.11

Kellogg served on the Appellate Division until he became a judge of the Court of Appeals, elected in November 1926 to fill the vacancy created by the retirement of Judge Chester B. McLaughlin (1856-1929), and his term began on January 1, 1927. Although Kellogg was a Republican, he had received bipartisan endorsement.12 He had been considered for the Court of Appeals in 1923, but withdrew at that time and Judge Irving Lehman (1876-1945) filled the seat.13 Among Judge Kellogg’s best-known writings as a Court of Appeals judge was Sliosberg v. New York Life Insurance Company.14 That case involved the constitutionality of a provision in the Civil Practice Act that stayed proceedings on certain insurance policies issued in Russia until after the United States formally recognized the new Soviet government. Former Governor Charles E. Hughes and John Foster Dulles represented the carrier. Like the Appellate Division below, the Court of Appeals held that this indefinite stay violated the federal constitution’s prohibition on the impairment of contracts. In June 1927, Middlebury College, his father’s alma mater,15 presented Kellogg with the honorary degree Doctor of Laws.16

After retirement from the Court, Kellogg returned to his house on Lake Champlain (near Valcour) where he had always summered.19 He died there on September 6, 1942 and was buried at Riverside Cemetery in Plattsburgh. Many judges served as honorary pall bearers, including Augustus N. Hand of the U.S. Court of Appeals for the Second Circuit.20 Representatives of the Clinton, Essex, and Franklin County bar associations also attended the funeral at Trinity Church in Plattsburgh.21

By all accounts, Judge and Mrs. Kellogg had no children.

Crane, “A Word of Appreciation of Judge Henry Theodore Kellogg Upon His Retirement From the Court of Appeals,” 264 N.Y. v. (1934).

We are unaware of any books or articles written by Judge Kellogg.