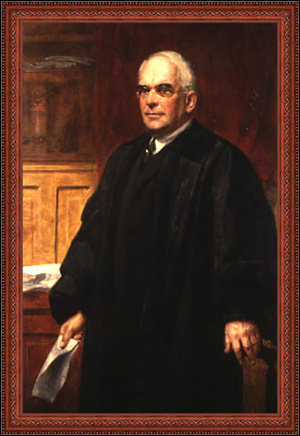 “Workmen’s compensation” was regarded by many as a radical idea in 1910. The country’s first law requiring employers to compensate workers injured on the job was passed in New York in that year, and its constitutionality was challenged at once. The case, Ives v. South Buffalo Ry. Co., came before a former Cornell Law School professor, Justice Cuthbert Pound, sitting in Erie County Supreme Court. Justice Pound held the statute valid, but on appeal the Court of Appeals unanimously decided otherwise.1 Time was on the side of Justice Pound’s views, however; the Court of Appeals’ Ives decision was overruled by a State constitutional amendment in 1913, and the holding of the case was eventually rejected both by a later Court of Appeals2 and by the United States Supreme Court.3 Twenty-three years after his decision in Ives, former Justice Pound, by then Chief Judge of the Court of Appeals, had the satisfaction of writing that “(m)uch that was said” in the decision reversing him had been “rendered obsolete.” 4

A willingness to uphold “liberal” or “progressive” views was a conspicuous feature of Judge Pound’s career. The tendency perhaps ran in the family; his great-uncle, Hugh Pound, was an anti-slavery leader in western New York whose farm was “one of the important stages on the underground railroad.”5 Hugh Pound was destined to have not only a distinguished great-nephew, but also a distinguished great-grandson, Roscoe Pound, dean of Harvard Law School and Cuthbert Pound’s second cousin, once removed.6

Cuthbert Pound was born on June 20, 1864, the son of a Lockport, New York, factory owner; he began law practice in Lockport as partner of his much older brother, John Pound (born 1843), a former mayor. Cuthbert Pound was also active in politics; a Republican, he served as Lockport City Attorney from 1888 to1890, and in the State Senate in 1894-95, where he sponsored a proposal to extend voting rights to women.7 He joined the Cornell Law School faculty in 1895, and remained a professor there until 1904, when his brother died and he returned to Lockport to continue the family law practice.

The rest of Pound’s career, until his retirement in 1934, was largely devoted to the Court; his most important outside activity was as chairman of the “Judicial Constitutional Convention” of 1921, which proposed revisions in the State’s judicial system that were approved by the people in 1925.8 Until 1932, Pound served with the most famous of all Court of Appeals judges, Benjamin Cardozo; the two were good friends, often allies on what was called the Court’s liberal wing, and on one occasion rivals. Chief Judge Frank Hiscock‘s term expired at the end of 1926, and both Cardozo and Pound wanted to succeed him. Governor Alfred Smith eventually supported Cardozo, who got the position, but Pound became Chief Judge in 1932, after Cardozo departed for the United States Supreme Court.9

During Pound’s two decades on the Court of Appeals, the most urgently debated legal issues were variations on the question he had faced in the Ives case: What are the constitutional limits on a state’s power to regulate private business? Pound held consistently to the view he expressed in Ives that the courts should defer to legislative judgments about economic regulation, an approach universally accepted today, but controversial in Pound’s time. In several decisions, Pound spoke for the Court in upholding regulatory statutes, laws regulating the purchase of milk and cream10, controlling residential rents11 and fixing minimum prices for the sale of milk12. In one case, Pound was prepared to go farther than any of his colleagues in upholding the State’s power. He alone dissented in a case where the Court, speaking through Cardozo, held a state tax on an interstate business to be unconstitutional.13

Pound’s opinions in freedom-of-expression cases were less celebrated at the time, but are of at least equal interest today. No judge on the Court was a stronger supporter of the right of the people to criticize their government. Pound dissented alone from a decision denying habeas corpus to a group of speakers arrested for addressing a meeting in the public streets without a permit. It was claimed that a permit had been denied because the applicants were Socialists, a denial which, Cardozo said in a concurring opinion, would be “a grave abuse of power.” Cardozo, however, joined the other judges in holding that the applicants were not entitled to a writ of habeas corpus, because they violated a law that was valid on its face. Pound took the position, debatable even by today’s more liberal standards, that the ordinance prohibiting the holding of public meetings without a permit was rendered invalid by its discriminatory enforcement.14

In the celebrated case of People v. Gitlow15, Pound, joined by Cardozo, dissented (though not on constitutional grounds) from a decision affirming a conviction for criminal anarchy; the defendant had published and circulated a paper advocating Communist revolution. Pound wrote: “Although the defendant may be the worst of men; although Left Wing Socialism is a menace to organized government; the rights of the best of men are secure only as the rights of the vilest and most abhorrent are protected.”16 Gitlow’s conviction was again affirmed on appeal to the United States Supreme Court, provoking one of Justice Oliver Wendell Holmes’s most famous dissents.17

In cases involving non-political speech, Pound seems to have been more in tune with his time. He joined a majority of the Court in upholding the conviction of a bookstore employee for possessing with intent to sell a work of fiction found to be “obscene, lewd or indecent,”18 though the book was said by two Appellate Division Justices to have “an almost world-wide acceptance among litterateurs as of literary merit.”19 But Pound later wrote for a 4-3 majority in holding that a dramatization of the folk song “Frankie and Johnnie” was not obscene, though he found its language to be “coarse, vulgar and profane” and its plot “cheap and tawdry.”20

Of course, Pound, like all judges, spent most of his career dealing with issues that got little public attention. He wrote important opinions expanding the rights of third-party beneficiaries under contracts,21 and the right to publish a fair and true report of a judicial proceeding.22 He wrote an opinion adhering to the long-standing rule that an infant could not bring an action for injuries sustained in his mother’s womb23, a decision overruled 30 years later.24 In a 1925 dissenting opinion25 and a 1933 opinion for the Court26, he addressed the question of what effect should be given to actions of the Soviet Government, at a time when that government was not recognized by the United States. In each case he urged that, while the Court could not recognize the validity of Soviet actions, it should recognize the facts resulting from them: “It is as if the Soviet Government had decreed the death of A and A had been executed. If he had been a citizen of New York we might say that he was murdered, but none the less we would proceed to administer his estate.”27

Pound, unlike Cardozo, rarely strove for literary effect, but he had moments of eloquence. One example is the excerpt from his Gitlow opinion quoted above; another appears in an opinion upholding the right of a state official to build a screen that concealed a billboard, where Pound wrote: “Beauty may not be queen but she is not an outcast beyond the pale of protection or respect. She may at least shelter herself under the wing of safety, morality or decency.”28 He also had a rarely-displayed ability to invoke the wisdom of the ancients. Concurring in a decision to enjoin a local referendum, he said that the proposed ballot wording “begs the very question which it purports to submit by assuming in its premises the conclusion which it is desired to prove. This was the fourth of Aristotle’s fallacies and a well-known lure in disputation.”29

Pound acquired a strong enough national reputation to be considered for appointment to the United States Supreme Court in 1922. Chief Justice William Howard Taft wrote to President Harding, advising him not to choose Pound; Taft described Pound as “a great dissenter,” who “evidently thinks it is more important that he should ventilate his individual view than that the Court should be consistent.” Pound was in distinguished company; in the same letter, Taft criticized Holmes, Justice Louis Brandeis and Judge Learned Hand on similar grounds.30

After retiring from the bench at the end of 1934, Pound reopened his Lockport office for the practice of law, but he was granted only one more month of life. Addressing a bar association dinner in Ithaca on February 2, 1935, he interrupted his speech to say: “Gentlemen, I must sit down. I’m sorry.” He seated himself, slumped on the table, and died the next morning of a cerebral hemorrhage, without regaining consciousness.31 He is buried in the Cold Springs Cemetery in Lockport.

In a law review article published shortly after Pound’s death, Henry Edgerton, soon to become a federal appellate judge, said that Pound was “a great judge” by many tests.32 Those who knew him spoke warmly of his kind nature, and admiringly of his keen intellect.33 A newspaper obituary reported “that he was a very glutton for work, sometimes perhaps driving forward the business of the Court too hard for the comfort of his colleagues,” but also that “he was one of the most kindly and genial of men.”34 A granddaughter who lived with him when she was a child thought the same; she remembers him as “a wonderful man” who loved the Court and “loved being a grandfather.”35

According to a Lockport newspaper, Pound remarked when he retired “that he had only one interest, the law,” and added: “It is the tragedy of my life. I have no hobbies. I don’t play golf. I do not drive a car. I do not play bridge. I do not sing. My life is one sided and incomplete.”36 His obituary-writer said that “he would have denied with a smile that he was an illustrious jurist, but would have admitted that he tried to be a good judge.”37

Address to Chief Judge Cuthbert W. Pound Upon His Retirement From the Court of Appeals (December 31, 1934, contained in Volume 266 of New York Reports, at v).

In addition to the above sources, the author reviewed a number of newspaper clippings and other archival documents obtained by Honorable Peter L. Broderick, County Judge and Surrogate, Niagara County, from Surrogate Court files and from the Lockport Historian; newspaper clippings supplied by Ms. Roberta Donovan, principal of John E. Pound Elementary School, Lockport, New York; and other sources cited in the Endnotes.

“The Relation of the Practicing Lawyer to the Efficient Administration of Justice,” 9 Cornell L. Q. 235 (1924).