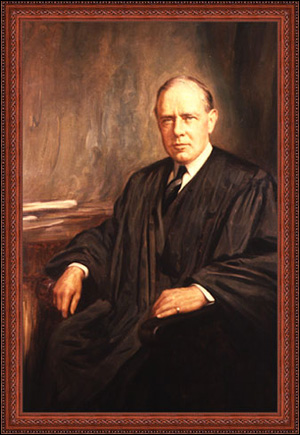 Chief Judge Frederick E. Crane enjoyed a 33-year career as a jurist-22 of those years on the Court of Appeals. Distinguished as that service was, his contributions were not limited to his duties as a judge, but reached even beyond-from presiding over the 1938 Constitutional Convention, to participating in the drafting of the Federal Rules of Criminal Procedure, to overhauling the court-martial system.

Frederick E. Crane was born on March 2, 1869 in Brooklyn, New York. After graduating from the Adelphi Academy, he received a law degree from Columbia Law School in 1889 and was admitted to the Bar the following year. He was the junior member of the firm of Dailey, Bell & Crane in Brooklyn until 1896, when he was appointed an Assistant District Attorney in Kings County. In 1901, he was elected as a Kings County Judge and, in 1906, as a Supreme Court Justice in the Second Department.

In 1917, Governor Charles S. Whitman designated then-Supreme Court Justice Crane temporarily to fill one of two vacancies on the Court of Appeals left by the resignation of Judge Samuel Seabury and the retirement of Chief Judge Willard Bartlett. In 1920, Judge Crane was elected to a full 14-year term as an Associate Judge on the Court. In 1934, Judge Crane succeeded retiring Chief Judge Cuthbert W. Pound.

His Court of Appeals Years

Chief Judge Crane described the Court of Appeals as “a work-shop” where “no man would be happy . . . who did not find his chief enjoyment and satisfaction in the work.”1 During his tenure on the Court, Judge Crane was considered by President Calvin Coolidge for the office of United States Attorney General as well as by New York State Republican leaders for the office of Governor. Instead, he remained on the Court for 22 years “with unfailing dignity and grace.”2 Chief Judge Irving Lehman observed that “[e]very lawyer who appeared at the bar of that court was treated by [Chief Judge Crane] with unfailing courtesy. To the timid he gave encouragement, to those who stumbled or halted he gave assistance, to all he gave a fair and patient hearing.”3

Judge Crane believed that “[t]he courts would make no progress at all if we were bound to follow blindly every decision of the past,” and that the law “is a rule of action with the emphasis upon action, governing the living, not praising the dead.”4 This philosophy is best illustrated in People v. Marino (271 NY 317 [1936]), in which he refused to read a previous Court of Appeals decision as a “crystallized” rule of law; instead he noted that courts must always be willing to “expand the rule to meet new circumstances.”5 In Association for the Protection of the Adirondacks v. MacDonald (253 NY 234 [1930]), Judge Crane wrote:

The words of the Constitution, like those of any other law, must receive a reasonable interpretation, considering the purpose and the object in view. Words are but symbols indicating ideas, and are subject to contraction and expansion to meet the idea sought to be expressed; they register frequently according to association, or like the thermometer, by the atmosphere surrounding them.6

Thus, the Court held that a statute permitting the cutting down of trees on the state lands of the Forest Preserve to build a bobsled run for the Olympic winter games was unconstitutional, because it violated the purpose of the constitutional provision, which was to forever keep the forest preserve as wild forest lands.

Judge Crane “never lingered in legal technicalities . . . letting common sense, always with respect for the moral and social implications, contribute to control the determination and application of the law.”7 In People ex rel. Bennett v. Laman (277 NY 368 [1938]), the Court held that a court of equity has jurisdiction to enjoin a defendant from practicing medicine without a license despite the fact that the defendant’s conduct also violated criminal law where the facts alleged showed that the defendant’s conduct imperiled the health of the community. In another case, People v. Alfani (227 NY 334 [1919]), Judge Crane, writing for the majority, upheld a conviction for practicing law without a license. In rejecting the Appellate Division’s opinion that the relevant Penal Law statute related only to court or legal proceedings, he wrote:

Is it only in court or legal proceedings that danger lies from such evils? On the contrary, the danger there is at a minimum, for a very little can go wrong in a court where the proceedings are public, and the presiding officer is generally a man of judgment and experience. Any judge of much active work on the bench has had frequent occasion to guide the young practitioner, or protect the client from haste or folly of an older one. Not so in the office. Here the client is with his attorney alone, without the impartial supervision of a judge. Ignorance and stupidity may here create damage which the courts of the land cannot thereafter undo. Did the Legislature mean to leave this field to any person out of which to make a living? Reason says no. Practicing law as an attorney likewise covers the drawing of legal instruments as a business8

In one of his more groundbreaking decisions, People v. Sanger (222 NY 192 [1918]),9 the Court of Appeals examined the constitutionality of New York’s “Little Comstock” laws.10 Although Judge Crane upheld the conviction of Margaret Sanger for selling contraceptives in violation of the statute, his decision interpreted New York’s “Little Comstock” laws broadly enough to permit at least married women some access to contraceptives.

Judge Crane’s decisions reflected his “abiding love for the city and state of his birth[,] a passionate love of justice, a bitter hatred for every kind of oppression, a boundless contempt for those who can serve others but who are too selfish or indolent to do so.”11 Fortunately, Judge Crane found ways of serving his beloved state and the law even away from the bench.

Other Contributions While on the Bench

One of Judge Crane’s great gifts, both during and after his tenure on the Court of Appeals, was public speaking. From an anti-crime radio address to children in their school auditoriums broadcast over statewide hookups,12 to law schools and county bar associations, Judge Crane often shared his views on the law. In particular, he believed that courts should not cling to outdated precedents and should instead think for themselves and “make the law fit new conditions and new problems.”13 Judge Crane used his speeches to encourage greater emphasis in law school curricula on the practical workings of the legal profession rather than just theoretical teaching.14 He also spoke out against those who shirk jury duty, and he urged reform of the criminal procedure law to combat increased crime.

In addition to his Court duties, Chief Judge Crane delivered special lectures at the Brooklyn Law School,15 and served as a visiting professor at Columbia University.16 He also presided over the 1938 Constitutional Convention, resulting in the document which to this day remains the New York State Constitution. Judge Crane stated that one of his objectives as president of the convention was to amend the constitution to eliminate certain legislative restrictions which, in his view, hampered efforts by the Legislature to address “many changes in our social and economic conditions.”17 On December 31, 1939, at age 70, he left the Court, as required by the Constitution he helped put in place.

Contributions After Leaving the Court of Appeals

Even after retiring from the Court of Appeals to private practice, Judge Crane continued to make significant contributions to the law and to society. In February 1940, Governor Herbert Lehman appointed him as a Moreland Act Commissioner18 to investigate certain State printing contracts.19 In July 1940, a federal judge appointed Judge Crane special master in the reorganization proceedings of the Associated Gas and Electric System, a utility system in bankruptcy.20 In February 1941, he served on the Advisory Committee to assist in the preparation proposed Federal Rules of Criminal Procedure.21 In October 1941, Mayor Fiorello LaGuardia asked Judge Crane to investigate charges that LaGuardia spent an excessive amount of money in his campaign for reelection.22 In 1943, Mayor LaGuardia appointed Judge Crane to an unofficial board to review a decision by the New York City police commissioner clearing a patrolman of charges of anti-Semitism and associating with persons engaged in subversive activities.23 In 1946, Secretary of War Robert Patterson appointed Judge Crane to a board of civilians to look into grievances and overhaul the military court martial procedure.24

Judge Crane died on November 21, 1947 at his home in Garden City, Long Island. He is buried at the Kenisico Cemetery in Valhalla, New York.

Judge Crane married Mary Gertrude Craven on December 13, 1893 and had two children: Dorothy Braddock Crane and Frederick Ralph Crane. His wife died on October 2, 1956. Tragically, his son, Frederick Ralph Crane, also a lawyer, died suddenly at the age of 43 of a heart attack just two years after marrying Eleanor McCammon Pool. The couple had no children.

Faculty Changes Made at Columbia, NY Times, Apr. 25, 1937, at 39, in ProQuest Historical Newspapers.

Miller Considered for Dougherty Post: Justice Crane of Brooklyn is Another Man the President is Said to Have in Mind, NY Times, Mar. 30, 1924, at 1, in ProQuest Historical Newspapers.

Detail Work of the New York Court of Appeals: An Address Before the Phi Delta Phi Association of New York, NY St BA Bull, at 477 (December 1933).

Keeping Up With the Law, Address at the Brooklyn Law School (November 13, 1928).

The Spirit of the Constitution, or More Particularly the Sixth Amendment, NYLJ, January 13, 14, 1925.

The Interrelation of the Legal and Medical Professions, Address Delivered Before the 325th Regular Meeting of the New York Academy of Medicine (April 10, 1922), reprinted from Medical Times (July 1923).