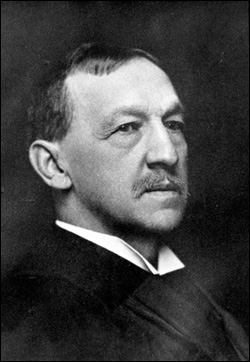 Justice Samuel Edwards was born in the Town of Glenville in Schenectady County on April 24, 1839. He prepared for college at academies in Schoharie and Washington counties, and in 1858 entered Union College, from which he was graduated in 1862. He studied law with S. L. Magoun in Hudson, Columbia County, and was admitted to the Bar in December 1864. He entered into a partnership with Robert E. Andrews (Andrews & Edwards). In January 1887, Gov. Hill appointed him to the Supreme Court for the Third Judicial District. In November of that year he was elected to a 14-year term. He was designated to the Appellate Division, Third Department, by Gov. Roosevelt in April 1900 to succeed Justice Herrick. He served until his Supreme Court term expired on December 31, 1901. He died on February 16, 1912. Justice Edwards also served one day on the Appellate Division in place of Justice Herrick on April 28, 1896.