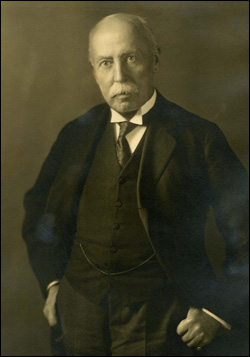 Pascal DeAngelis was born at Holland Patent, Oneida County, New York on January 27, 1850. He was the grandson of a Revolutionary War sailor who was also a farmer and a Justice of the Peace. He attended Cary Collegiate Institute, Hobart College, and Cornell University, receiving a Bachelor’s Degree from the latter in 1871. He then read law in an office in Towanda, Pennsylvania, and was admitted to the Pennsylvania bar in 1873. After two years of practice there, he moved to Utica and was admitted to the New York bar. From 1875 to 1906 he engaged in what was, for the most part, a solitary practice of law.

In addition to his law practice, DeAngelis was very active in the Republican Party. He was a delegate to the long series of Judicial Conventions between 1883 to 1929. His first receipt of official patronage came in 1886, when he was appointed to the Board of Managers of the Utica State Lunatic Asylum. He held that post for seven years. He was elected a member of the Utica Board of Education in 1900, a position he held until his election to the Supreme Court for the Fifth District in 1906.

DeAngelis presided as a trial judge from 1907 to March 7, 1916. On the latter date he was elevated to the Appellate Division for the Fourth Department, where he remained until his mandatory retirement at the close of 1920.

In anticipation of his retirement, DeAngelis ran for and won a seat on the Utica Board of Education. His second tour thereupon ran from 1921 to his death. He also sat as President of the Board from 1928 onward. During this period, he was also functioning as an Official Referee and as a Trustee and 1st Vice-President of the Savings Bank of Utica, in addition to assorted voluntary activities. He died in Utica, New York on May 2, 1932.