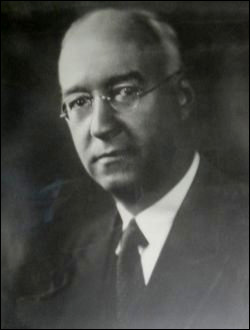 The judicial career of Justice John V. McAvoy was a long one, spanning 29 years or half his lifetime, as he died at the age of 58. While on the First Department bench he authored many important opinions and even helped revolutionize the transit system in New York City.

Justice McAvoy was born in New York City. His father was an important politician in Tammany Hall. McAvoy was educated in New York City, receiving his A.B. from Manhattan College in 1897 and his LL.B. from New York Law School in 1899. He was admitted to the Bar that same year and subsequently went into private practice.

In 1907 he was elected a judge for the City Court. His term was ten years, from January 1, 1908 until December 31, 1918. He was later elected to the Supreme Court of the State of New York in 1918 for a 14-year term. Finally, in 1923, Governor Alfred E. Smith appointed him to serve as an Associate Justice at the Appellate Division First Department.

The judicial career of Justice McAvoy had many highlights. He wrote an important opinion in 1927 upholding the Baumes Laws, which stated that sentencing a fourth-time offender to life in prison is no worse than sentencing a murderer to death. Perhaps Justice McAvoy is most remembered for his appointment by Governor Alfred E. Smith to serve as a Moreland Act commissioner in 1924 to investigate accusations that the State Transit Commission was not complying with regulations. McAvoy found most of the transit commissioners not guilty, and put the majority of the blame on New York City Mayor Hylan and the Board of Estimates. He also gave numerous suggestions on how to improve the transit system, and many of his ideas were later instituted.

Justice McAvoy was married in 1904 to Marian Newcomb McAvoy. Together they had six children, three sons and three daughters. McAvoy was an accomplished violin player, and his wife a piano player. He died April 12, 1937 of heart disease at the age of 58.