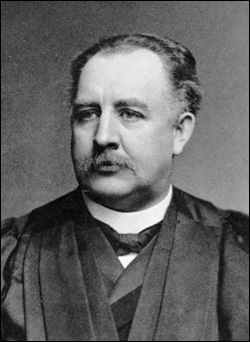 In 1920, Judge Chase was elected to the Court of Appeals. See his full biography HERE.

Judge Emory A. Chase, born August 31, 1854, in Greene County, was elected a Supreme Court Justice for the Third Judicial District in November 1896 (re-elected in 1910). He served on the Appellate Division, Third Department, for a five year term, January 8, 1901, to 1906. He was appointed to the Court of Appeals, effective January 9, 1906, by the Governor, under a certificate of need from the Court of Appeals (as authorized by 1899 Constitutional amendment). While serving as an additional temporary judge, he also served as a member of the Court for the Trial of Impeachments after the Assembly impeached Gov. Sulzer on several charges of misconduct in August 1913. The lead counsel for the Governor was former Appellate Division Justice D. Cady Herrick. He was elected to the Court of Appeals in November 1920 and continued his service there until his death on June 25, 1921.