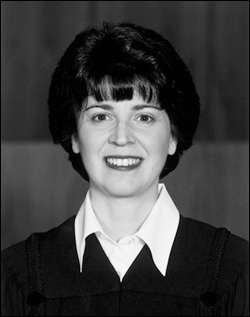 In 2001, Judge Graffeo was appointed to the Court of Appeals. See her full biography HERE.

Judge Victoria A. Graffeo was appointed to the Third Department on March 31, 1998. She was elected to the Supreme Court for a term commencing January 1997, having been appointed to fill a vacancy on that court in September 1996. She served as Solicitor General for the State in the Office of the Attorney-General from 1995 to 1996. Justice Graffeo spent 10 years of her legal career in the State Legislature, acting as Chief Counsel to the Assembly Minority Leader from 1989 to 1994 and Counsel to the Assembly Minority Leader Pro Tempore from 1984 to 1988. She began her career in public service as Assistant Counsel to the State Division of Alcoholism and Alcohol Abuse in 1982. Earlier, she was in private practice with a law firm in Colonie. A resident of Guilderland in Albany County, Justice Graffeo graduated from the State University College at Oneonta in 1974 and Albany Law School in 1977. She was nominated to the Court of Appeals by Governor Pataki in November 2000 and sworn in as a member of that Court in January 2001. She was born in Rockville Centre in 1952.