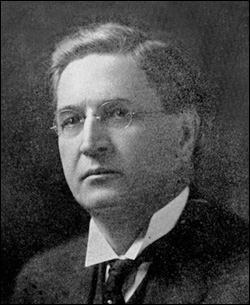 Justice Michael H. Kiley was born in Horicon, Warren County, on August 28, 1861. His parents had emigrated from Ireland just three years before, in 1858. He attended Warrensburg Academy at Warrensburg and then the Yates Union Free School at Chittenango in Madison County. Justice Kiley had gone to Chittenango in the fall of 1880; that fall he worked for his board in the family of Dr. John R. Eaton; in the spring, he worked on the farm of Charles Peck in Manlius, Onondaga County. He entered the Cazenovia Seminary in the fall of 1881 and graduated in June 1883. After studying law with D.W. Cameron, he was admitted to practice on April 26, 1886, at Utica. After admission he practiced with Mr. Cameron until 1891 (Cameron & Kiley) and thereafter alone. In 1887, he was elected a justice of the peace. In 1888, Justice Kiley was defeated in a school board election, apparently because the election focused on his nationality and religious belief. He was elected Madison County District Attorney in 1895 and re-elected twice, in 1898 and 1901. He then was the elected County Judge and Surrogate of Madison County for seven years. He was then elected a Supreme Court Justice for the Sixth Judicial District for a term to expire at the end of 1926. He served on the Appellate Division from the beginning of 1920 until his death on May 19, 1923, at the age of 61.