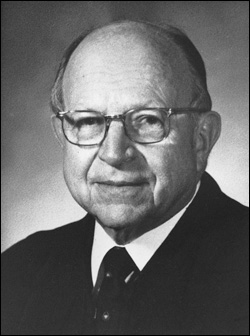 In 1969, Judge Gibson was appointed, and later elected, to the Court of Appeals. See his full biography HERE.

Judge James Gibson was born in Salem, Washington County. Both his father and great-grandfather were judges. He obtained his preliminary education at Salem Academy. After graduating from Princeton in 1923 and Albany Law School in 1926 and being admitted to the Bar that same year, he began a general law practice in Hudson Falls in Washington County with the firm of Rogers & Sawyer. The firm later became Sawyer & Gibson until Mr. Sawyer’s death in 1936. In 1935, he won election as District Attorney of Washington County, a post his father once held, and was the State’s youngest prosecutor at the time. In World War II, he served in Europe as a captain in the Army. In 1952, he was elected to the Fourth Judicial District Supreme Court. Three years later he was designated to the Appellate Division, Third Department. Effective January 1, 1964, Gov. Rockefeller appointed him Presiding Justice. On September 15, 1969, he was appointed an associate judge of the Court of Appeals; he was elected to the position in 1969; he continued on the Court until mandatory retirement in 1972. He retired from the Supreme Court in 1978. Thereafter, until 1984, he practiced law in Glens Falls. Judge Gibson died May 29, 1992, at the age of 90. In 1976 and 1977, Judge Gibson was given the responsibility of presiding as special master over complex litigation over New York City’s defaulting on $1 billion of notes in the fiscal crisis.