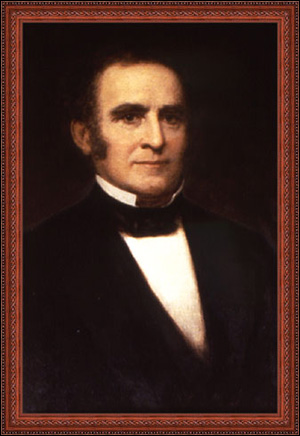 Contested elections resulting in heated litigation may seem to be a recent political phenomena, but a November 1855 election for Supreme Court Judge was as contentious as they come. Not until July 1856 was Henry E. Davies, future Chief Judge of the New York Court of Appeals, securely seated as Judge, despite an earlier Court of Appeals ruling declaring him the winner. The conflict waged between courts, branches of government, and judges, culminating in litigation spurred by a broken political promise that resulted in a precedent-setting decision.

After the election, a game of political musical chairs began when Judge Cowles resigned, and Governor Clark appointed Peabody to replace him. Peabody served until the end of the year, when James R. Whiting, who had defeated Judge Cowles in the election for the seat held by Judge Edwards, took over his duties. Governor Clark, treating the votes cast for Judge Morris’s term as void for lack of official notice, nominated Judge Cowles to fill Judge Morris’s seat. The Attorney General filed a quo warranto bill1 against Judge Cowles, and Davies was made a plaintiff. The New York County Supreme Court declared the election to fill Judge Morris’s seat invalid. Davies appealed to the Court of Appeals, but before the Court addressed his appeal, two New York County Supreme Court judges informally notified Davies that they considered the Judge Peabody the winner of the election. However, shortly thereafter, the Court of Appeals reversed the original Supreme Court ruling, thus seemingly paving the way for Davies to win the seat (13 NY 350 [1856]).

Amazing events followed. On February 14, 1856, a three-judge Supreme Court panel, including Judge Peabody, came to order. Davies then entered the courtroom, handed the clerk a copy of the Court of Appeals opinion, and took a seat on the bench. The same thing happened the next morning, this time in front of a crowd drawn by curiosity. Davies – Judge Davies – proceeded to hear motions and grant orders, as did Judge Peabody. Arguments continued in front of this three-judge foursome, at which both Judges Peabody and Davies were present, along with two other Judges.

On March 17th, Judge Peabody withdrew after assurances from the Attorney General that he would institute a proceeding to oust Judge Davies. However, the Attorney General eventually refused to do so, and Judge Peabody moved to compel the Attorney General to act. The New York County Supreme Court held that the Attorney General2 could not be compelled to prosecute an action (13 How Pr 179, 1856 WL 6441 [1856]), a position later adopted by the Court of Appeals (see People ex rel. Demarest v. Fairchild, 67 NY 334 [1876]) that remains the law of the state (see Matter of Garrison Protective Servs. v. Office of Comptroller of City of New York, 92 NY2d 732, 736 [1999]).3

Before becoming a judge, Judge Davies’s career was marked by success in business and politics. He was born on February 8, 1805, in Black Lake, St. Lawrence County, New York, where his father, who for ten years was sheriff of St. Lawrence County and for several years served as county judge, had relocated from Connecticut after suffering ruinous business setbacks.

At 14, young Davies began to study law with Alfred Conkling in Canandaigua, who was soon elected to the United States House of Representatives and later served for almost 30 years as a United States District Court Judge of the Northern District of New York. In 1826, Judge Davies was admitted to the Bar and began his legal career in Buffalo, where his successes led to his election as city attorney. While in Buffalo, Judge Davies formed what was to be a lifelong friendship with Millard Fillmore, future President of the United States. In fact, upon President Fillmore’s departure from office, he sought the advice of Judge Davies, and the two toured Europe together.

In 1829, Judge Davies moved to New York City, where he formed a partnership with his uncle, Judge Samuel A. Foot, who observed that Judge Davies’s business acumen helped the partnership’s financial success. The firm represented a number of corporate clients, including the Erie Railroad Company. On July 1, 1835, he married Rebecca Waldo Tappan, daughter of John Tappan, a prosperous Boston Merchant and brother of well-known abolitionists Lewis and Arthur Tappan. In 1848, Judge Davies entered into a partnership with William (later Judge) Kent, son of Chancellor James Kent.4 After being elected Alderman in 1842, Judge Davies became the first New York City Corporation Counsel in 1849.5

Judge Davies wrote a number of important opinions, including Kortright v. Cady (21 NY 343 [1860]), which held that the tender of money due on a mortgage, at any time before foreclosure, discharges the mortgage’s lien; Dealfield v. Parish (25 NY 9 [1862]), an in-depth examination of testamentary capacity; and People v. Canal Appraisers (33 NY 461 [1865]), a similarly in-depth look at the law and history of riparian rights. On the criminal side, People v. Lamb (1 Cow Cr Rep 423, 429 [1866]) held that self-defense is justified only “to ward off great, impending and imminent danger of bodily harm,” and examined the use of character evidence for both the accused and the attacked. In Metropolitan Bank v. Van Dyck (27 NY 400 [1863]), an opinion cited by state and federal courts across the nation, Judge Davies sustained the power of the federal government to issue legal tender.

While on the Court, Judge Davies was also an active supporter of the federal government during the Civil War. He helped organize the 2d New York Cavalry, which served for the entire conflict up to and including Appomattox, where the regiment performed notably. Judge Davies’s nephew, J. Mansfield Davies, was the first colonel of the regiment, and the Judge’s son, Henry Eugene Davies, who was also to become a judge, later served as the regiment’s colonel before being promoted to Brigadier General for his meritorious service.

After leaving the Court, Judge Davies returned to private practice in New York City, first in partnership with Judge Noah Davis, Jr.6 and then with his son, Julien Tappan Davies, with whom he formed the firm Davies, Work, McMamee & Hilton. In addition to serving as referee in a number of cases, Judge Davies often argued appeals before his former colleagues at the Court of Appeals, sometimes with his son Julien. The pair argued on behalf of one of the firm’s most prominent clients, The Mutual Life Insurance Company of New York (Leggett v. Mutual Life Ins. Co., 53 NY 394 [1873]), and on behalf of Judge Davies’s brother Thomas, himself a lawyer and former general (Calvo v. Davies, 73 NY 211 [1878]). The Davies duo also represented Jacob H. Vanderbilt before the Court (Sturges v. Vanderbilt, 73 NY 384 [1878]). Twenty-five years later, Julien’s granddaughter Emily, would marry another of the Vanderbilt clan, William H. Vanderbilt III.7

In addition to his private practice, Judge Davies served as the Dean of the Law School of the City of New York, now known as New York University, from 1870 to his death on December 17, 1881.8 He was a director and later president of the Institute for the Instruction of the Deaf and Dumb, which was the first school of its kind in the United States. Judge Davies also played an active role in politics, supporting Theodore Roosevelt’s first foray into the arena, a bid for a New York State Assembly seat.

In his Davies genealogy, Henry Eugene Davies, Judge Davies’s son, wrote that “Judge Davies was conspicuous during his long and busy life for sterling integrity and devotion to interests committed to his charge. His capacity for labor was prodigious and sustained by a constitution of iron that gave him enormous power of endurance. The memory of his pure, strong, loving spirit is the most precious heritage of his living descendants.”

Judge Davies’s descendants are numerous and noteworthy. His sons, mentioned above, and at least one grandson were attorneys of note. Other descendants became prominent in New York City social life and charitable activities. A great-granddaughter, Isabel Davies Thacher, started a renown New York City design firm, Isabel Barringer Associates. Another great-granddaughter, Emily Vanderbilt Wade, is currently a life member of the Massachusetts Institute of Technology’s corporation.

Davies, Davies Memoir: A Genealogical and Biographical Monograph of the Family and Descendants of John Davies of Litchfield, Connecticut (privately printed by Henry Davies, 1895), pp. 74-81.

Genealogical and Family History of Southern New York and the Hudson River Valley (1913), http://www.usgennet.org/usa/topic/historical/southernnewyork/sny32.htm (accessed April 11, 2005) (available on file with the author).

Greener, A History of the Office of the Corporation counsel and the Law Department of the City of New York (3d ed. New York 1925).

Legal Opinion, A Class of Bonds of the State of Tennessee, Liens upon Certain Railroads in that State (1870).

A Compilation of the Laws of the State of New York, Relating particularly to the City of New York (1855).