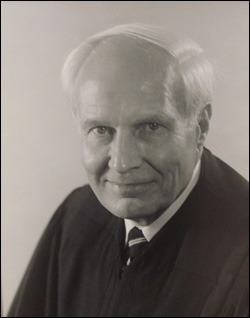 James H. Boomer was born on August 13, 1922. He served during World War II as a Naval Aviator from 1942 to 1946. Justice Boomer graduated from the Syracuse University College of Law, summa cum laude, in 1948 and was admitted to practice that year. He served as this Court’s first research assistant from January 1948-July 1949. He became the Corporation Counsel for the City of Rochester in 1949 and served in that capacity until 1961. Thereafter, he practiced law in Rochester until 1970 when he was elected to the Supreme Court in November 1970. He was designated to the Appellate Division, Fourth Department by Governor Hugh Carey in 1982. During his term he served as a Trustee to the Appellate Division Law Library and served as the Chair of the Indigent Criminal Appeals Management Counsel for the Seventh Judicial District. He also served briefly as a temporary judge of the Court of Appeals. Justice Boomer was an avid hiker and mountain climber, scaling Mount Kilamanjaro at the age of 70. He died during a hiking expedition on November 14, 1993.