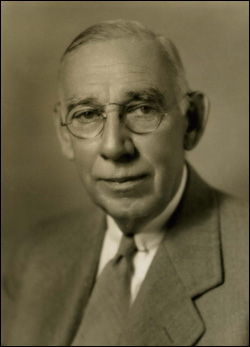 George A. Larkin was born in Olean, NY on December 10, 1878, the son of a cigar maker. He attended social public schools and won a scholarship to Cornell University from which he graduated, Phi Beta Kappa, in 1901. He studied law in the office of Cory, Rumsey & Hastings in Olean, and was admitted to the bar in 1903.

Larkin put in time as a Republican Party member and was elected Surrogate of Cattaraugus County in 1914, a post he held from 1915 to the close of 1917. In that year he was elected Cattaraugus County Judge, where he sat until the end of 1924. In the latter year, he was elected to a higher position, the State Supreme Court for the Eighth District. He was re-elected in 1930, and sat from 1925 to his mandatory retirement at the close of 1948, for the last five years as Associate Justice of the Appellate Division of the Fourth Department. He acted as an Official Referee from 1949 to 1954, resigning due to ill health. He died the following year.