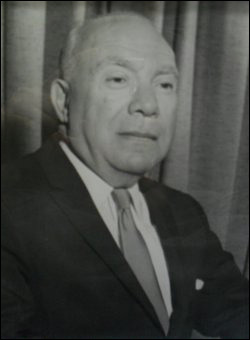 Louis Joseph Capozzoli was born on March 6, 1901, in Cosenza, Italy, and emigrated with his family to the United States in 1906. After attending New York City’s public schools, he received his law degree from Fordham University Law School in 1922 and was admitted to the Bar the following year. He commenced practice in New York City.

Capozzoli was Assistant District Attorney of New York County from 1930 to 1937 and was a member of the New York State Assembly from 1939 to 1940. He was elected a U.S. Representative to the Seventy-seventh and Seventy-eighth Congresses and served from 1941 to 1945. Due to reorganization of Congressional Districts, he was not a candidate for renomination in 1944. As chairman of a subcommittee of the Merchant Marine and Fisheries Committee, he took part in the investigation of fraud and other irregularities in the country’s shipyards.

He began his judicial career in 1946, when he was elected a justice of the New York City Court. Resigning from that position in 1950, Capozzoli was elected to the Court of General Sessions, New York County, later that year. He served until early 1957, at which time Governor Harriman appointed him to the Supreme Court bench for an interim term. He was elected to a full 14-year term in November of that year.

In May of 1966, Governor Rockefeller designated Justice Capozzoli, on a temporary basis, to the Appellate Division First Department. In December of that year, Rockefeller redesignated him to a full five-year term on that court. He remained there until his retirement in 1977.

Upon retirement from the bench, he served on the State Attorney General’s Advisory Committee on Ethical Standards. Also, the Special Masters Program of the Appellate Division First Department was begun in the 1970s when retired Justices Capozzoli and Steuer began to meet with parties to an appeal in an effort to reach settlement. Over the years the Program has been expanded and formal court rules adopted for its administration.

The New York County Lawyers’ Association named its annual award after Justice Capozzoli, and the Louis J. Capozzoli Gavel Award is given in recognition of exceptional contributions to the system of justice.

Justice Capozzoli married Adele Valli Capozzoli in 1927. They had three children. He died of a heart attack on October 8, 1982, at age 81.