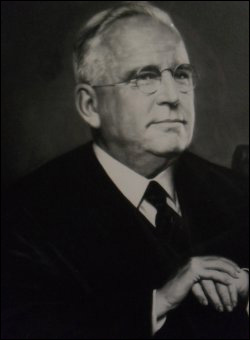 “Confidence of the public in our judiciary can be maintained only so long as justice is administered swiftly, fairly and fearlessly,” Justice Martin declared after being inducted as Presiding Justice of the Appellate Division, First Department on January 2, 1935. (Martin Inducted as Head of Court, New York Times, Jan. 3, 1935, p.10)

Born October 3, 1878 in Watervliet, New York, to Dennis and Catherine Keegan Martin, Justice Martin attended elementary school in Albany County. He graduated from New York Law School in June, 1902 and later that year was admitted to the bar. In 1903, Justice Martin moved to the Bronx and was still residing in the same house at the time of his death.

In 1905, Justice Martin became an Assistant Corporation Counsel, remaining in this position until he decided to run for District Attorney of Bronx County in 1913. He had an excellent conviction record and received the endorsement of many bar associations. Justice Martin served as District Attorney until 1920, and was very aggressive in battling organized crime, again attaining a high conviction record. Only one of his convictions was reversed by the Appellate Division; however, it was later reinstated and confirmed by the Court of Appeals.

In 1915 and again in 1938, Justice Martin served as a delegate to the New York State constitutional convention. In 1920, he became a candidate and was elected to the Supreme Court, First Judicial District. Justice Martin was re-elected in 1934 and received bi-partisan endorsement.

In January, 1935, Justice Martin was inducted as Presiding Justice of the Appellate Division, First Department, succeeding Justice Edward R. Finch, who was elected associate judge of the Court of Appeals. He was very interested in court unification and streamlining in order to increase efficiency. In fact, in 1936 at a meeting of the Columbia University Law School Alumni Association, Justice Martin advocated unifying the civil and criminal courts into a Supreme Court which would also handle probate cases, a Municipal Court for civil cases up to $3,000 and a magistrate’s court for misdemeanors.

Justice Martin served as Presiding Justice until his death on June 1, 1947 at the age of 68. He had just returned from mass with his family when his heart gave out. A branch of The New York Public Library in the Bronx has been named after him.

He was married to Edith Cora Rowan Martin in 1910 and they had two children – Edith and Francis Martin, Jr.