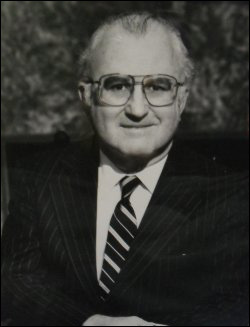 The son of a New York City Corrections Officer and a first generation American, Justice Joseph P. Sullivan has the distinction of being the longest serving Appellate Division Justice in New York State history, 30 years.

Upon his admission to the Bar, Justice Sullivan engaged in private practice in Bronx and New York Counties. After six years, he then became Law Secretary to Supreme Court Justice George C. Tierney (1965-1968). Judge Sullivan’s judicial career began in 1968, when he was elected to the Civil Court of the City of New York, Bronx County. He served for four years until 1972, when he was elected to the Supreme Court, Bronx County. In 1978, Governor Hugh Carey appointed Judge Sullivan to the Appellate Division, First Department.

Justice Sullivan will forever be linked to the memorable 1983 New York Yankees-George Brett Pine Tar court case. When the home run hit by Kansas City Royals player George Brett was disallowed due to an excess of pine tar applied to the baseball bat, the President of the American League overturned the umpire’s call and ordered the completion of the game. The Yankees then obtained a court injunction preventing the resumption of the game and the League appealed to the Appellate Division seeking vacatur of the injunction. When the ruling was issued, Justice Sullivan proclaimed “Play Ball,” recognizing the fact that Major League Baseball has jurisdiction over the interpretation of baseball rules. The infamous bat is now located in the Baseball Hall of Fame.

While at the Appellate Division, Justice Sullivan was nominated 10 times by the Commission on Judicial Nomination for appointment to the Court of Appeals, including twice for the office of Chief Judge. In 2000, Governor George Pataki appointed Judge Sullivan Presiding Justice of the Appellate Division, First Department, a position which he held until 2001, when he turned 70. At that point, he became an Associate Justice once again, serving until the end of 2007.

Upon reaching mandatory retirement age after three recertifications to the Court, Justice Sullivan stepped down from the bench and joined the firm of Holland & Knight as counsel.

Justice Sullivan and his wife Patricia are the parents of five daughters, one of whom passed away in 2009.