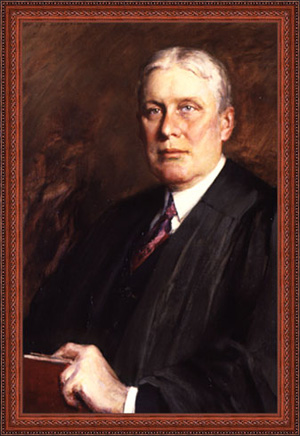 John Francis O’Brien, son of former Court of Appeals Judge Denis O’Brien and chief of the appellate bureau of the New York City Corporation Counsel’s office, probably started his workday in late 1926 with a scan of newspaper articles about labor strife in Britain, or maybe he reviewed a few appellate decisions published the day before. He would have looked forward to a quiet day that would permit him time to polish a brief or contemplate the City’s litigation strategy. What he least expected was a phone call, out of the blue, from Governor Al Smith, whom he had never met. The call was to offer O’Brien a chance to join the highest appellate court in the state as an Associate Judge of the Court of Appeals. That dramatic phone call was the official start of O’Brien’s judicial career, but the roots of that career extended much farther back.

O’Brien was born to then-Alderman Denis O’Brien (later a Judge of the Court of Appeals) and his wife, Margaret McCahil O’Brien, on June 13, 1874 in Watertown, New York. Young O’Brien started the long journey to the Court by attending Watertown public schools. He entered Georgetown University for his undergraduate education, where he earned his AB in 1896. O’Brien then directly entered New York Law School. He was admitted to the New York bar in 1898, the same year he graduated law school.

Upon graduation, O’Brien’s first job was as an Assistant Corporation Counsel for the City of New York. The position must have suited him, because he remained with that office through eleven Corporation Counsels, eventually rising to become Chief of the office’s appeals bureau in 1920 (note that this was well after O’Brien’s father had retired from the Court of Appeals). As the City’s top appellate litigator, O’Brien appeared frequently before the Court, and impressed the judges there tremendously with the clarity and brevity of his arguments.

While working for the Corporation Counsel, O’Brien also impressed Hilda LeGrand Lockwood, descendant of a wealthy and accomplished New England family, who married him in 1914. They would have two children, Katherine L. (also called Kathleen) and Francis.

In 1926, when Benjamin Cardozo was elevated to the Chief Judge’s seat, Governor Al Smith (Democrat) offered the nomination for Cardozo’s former spot on the Court to Victor J. Dowling, then a Justice of the Supreme Court, Appellate Division. When Justice Dowling turned down the post, Governor Smith took the unusual tack of asking Chief Judge Frank Hiscock of the Court of Appeals whom he and his colleagues recommended for Cardozo’s replacement as Associate Judge. They unanimously suggested O’Brien. Governor Smith embraced the Court’s advice and called 52-year-old O’Brien at his municipal office, without warning, to give the good news. O’Brien was startled to get the call, but the governor assured him that “I know all about what you have been doing in your job. . . . Your future associates on the bench have told me all about that and have recommended you for the appointment.”1

O’Brien, a Tammany Hall Democrat like Smith, accepted the appointment and joined the Court on January 20, 1927. With filial devotion, he chose to wear his father’s robe and sit in his father’s chair. That spring, O’Brien earned additional regalia when Syracuse University awarded him its honorary Doctor of Laws Degree.

Not long after he joined the Court by appointment, O’Brien was compelled to run for his seat in the 1927 election. During that summer, before the Democratic and Republican nominating conventions, Governor Smith worked to convince the Republican party that it should cross-endorse Judge O’Brien. After considerable politicking, with successive tit-for-tat deals made and breached, the Republicans finally agreed to nominate Judge O’Brien, all in the name of nonpartisan treatment for candidates for the Court of Appeals.

O’Brien’s candidacy was helped along by his identity as a Roman Catholic, because there were no others on the Court of that religion and political feeling at the time supported keeping one Catholic on the Court. One behind-the-scenes power broker had warned Governor Smith that Judge John Hogan‘s departure from the Court left no Catholic on the Court, and that “the Cathedral [i.e., Catholic Archbishop of New York Joseph Cardinal Hayes] will not sit idly by.”2 O’Brien’s religion, of course, “pleased the cardinal.”3 The backing of the cardinal for O’Brien softened the partisan rancor connected with Judge Cardozo’s elevation to the Chief Judge’s seat and allowed the Republicans to cross-endorse O’Brien. Once both major parties was his, O’Brien handily defeated the Socialist candidate, Hezekiah Wilcox, and won the right to keep his seat for fourteen years.

O’Brien’s position as a judge offered him and his family far greater social prestige than they had maintained when he worked for the City. By the time Katherine O’Brien was a teenager, with the Great Depression still winding down, the O’Brien family’s rise from its rural roots was clear: her débutante ball was a major Manhattan social occasion, and parties in her honor were reported in the New York Times.4

Judge O’Brien’s opinions on the court were best known for his concise writing style. The judge took brevity so seriously that he refused to use a typewriter, on the theory that the ease of writing with it promoted prolixity. He produced several noteworthy writings. In an appeal from a first-degree murder conviction, the Court of Appeals reversed the judgment of conviction because it was based on a confession by the defendant after he had been detained for thirty-six hours in the police station.5 The Court suspected that the defendant’s allegations that he had been beaten, threatened, and deprived of food or drink during those long hours were true. To oppose brutal police tactics, what the newspapers called the “third degree,” the Court suppressed the confession. Judge O’Brien dissented, arguing that the confession remained credible.

In contrast, Judge O’Brien garnered a majority of the Court for his opinion upholding New York City’s efforts to resist a fare increase on the IRT rail line.6 O’Brien also wrote for the Court in denying the admissibility of lie detector tests offered by the defense, unless supported by expert testimony.7

Judge O’Brien served until the spring of 1939, when illness forced him to take an unofficial leave from his responsibilities. Finally, on December 7, 1939, he sent his resignation to Governor Lehman, intending it to take effect on the last day of the year. In his letter, O’Brien explained that he had over-exerted himself during the summer of 1938, presumably because of strenuous physical activity at the family summer home in Sugar Hill, a fashionable town in the White Mountains of New Hampshire. O’Brien died of a heart attack on Christmas Day, 1939, less than one week before he would have left state service. His funeral service was at St. Vincent Ferrer Roman Catholic Church in Manhattan, and his remains were buried at Norwalk, Connecticut.

Sadly, because he died before his term expired, Judge O’Brien’s family lost a sizable pension. If the judge had lived through the end of the year, his widow would have been entitled to $128,000, but instead she received just $44,735. Hilda O’Brien, disappointed by this capricious result, sued the state Comptroller, ultimately forcing the Court of Appeals to decide against her in a unanimous opinion explaining that no special rule could be applied to the O’Brien family other than what applied to other state workers in a similar situation.8

Judge O’Brien had two children: Katherine L. and Francis. No descendants of those children have been identified.

“O’Brien, John Francis,” 42 National Cyclopaedia of American Biography Being the History of
the United States 218 (1958).