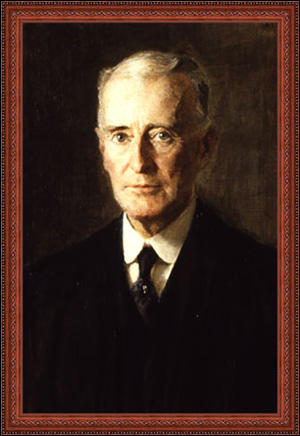 When Alfred E. Smith was elected Governor of New York in 1919, he asked his friend Judge John W. Hogan to perform his official private swearing in. When again elected Governor in 1923 following his 1920 defeat, Smith once more called on the same friend to perform the private oath that returned him to office.

Judge John W. Hogan was born in Troy, New York on November 10, 1853. He moved to Watertown when he was six years old and spent most of the early part of his life there. Hogan attended a parochial and private school as a youth and upon graduation entered the law office of Justice Pardon C. Williams. Admitted to the bar in 1876, Hogan was soon involved in Democratic politics. He served two years as the city attorney of Watertown, a post he was appointed to by Mayor Denis O’Brien.1 When O’Brien became state Attorney General in 1884, Hogan moved to Albany to serve as his deputy, where he worked for over 10 years throughout the terms of O’Brien, Charles Tabor, Simon Rosendale, and Theodore E. Hancock, a Republican.2 His longevity in this post is an indication of his excellent record as an attorney and his popularity among leaders in Albany.

In 1894, Hogan married Ms. Louisa Smith of Ottawa and left the Attorney General’s office due to failing health. He then spent more than a year in the South, recuperating. In 1896, Hogan entered into a partnership with Theodore E. Hancock, who was still the state Attorney General, forming Hancock, Hogan, Beach & Devine in Syracuse. Hogan became a recognized leader within the Onondaga County Bar, the State Board of Charities, and the Knights of Columbus, where he was held in the highest esteem.3

In 1912, Judge Hogan was nominated by the Democratic party, along with William Cuddeback,4 as a candidate for the Court of Appeals. Woodrow Wilson, on the presidential ballot for the first time in 1912, helped to sweep the Democratic ticket into office. Judge Hogan defeated Judge Frank H. Hiscock5 in this election.

In his 11 years of service on the Court, Judge Hogan wrote a wide array of opinions on subjects as diverse as criminal, estate, contract, municipal liability, tort, and family law. These opinions reveal Judge Hogan’s judicial style as concise and straightforward. Hogan left the Court of Appeals in 1923 when he reached the constitutional age limit of 70 years and went into law practice with Bonynge & Barker in Manhattan.

Judge Hogan died suddenly on January 30, 1926 at the age of 72 in the Copley-Plaza Hotel in Boston. He was taken to Boston the week before to see a noted physician for treatment for arteriosclerosis. Funeral services were held at the Church of St. Ignatius Loyola, at Park Avenue and 84th Street in New York. Upon his passing, the judges of the Court of Appeals wrote in his memorial:

He came here in full maturity of his powers. A lawyer of experience and ability, his long service in the office of the Attorney-General made him especially valuable in cases involving contracts made by the State or the powers and duties of its administrative officers. He had a fair and open mind. No preconceived prejudices led him astray. . . . In preparing for work Judge Hogan spared neither time nor labor. No precedent bearing on the case before him was not examined. He came through thoroughly ready with reasoned conclusions illumed by his knowledge of the law and his own great common sense. While vigorously supporting his opinions, he was always ready to listen to the views of his associates, and when convinced or doubtful had no pride or obstinacy that led him to persist in error. No harsh word, no caustic criticism, was ever heard from him. When his judgment did not prevail he assumed that he was mistaken, that the majority was right. He well knew that many questions permit of two answers, each given with equal honesty, each supported by logical arguments, appealing to different types of mind. To the final decision he was ever loyal.

He had deep religious convictions and an unyielding sense of fundamental right and wrong, and he followed those convictions firmly and unalterably. . . . The fact that we had been opposing candidates in 1912 never clouded our friendship for a minute and I learned greatly to appreciate and respect his personal and judicial qualities and ability. . . . He was industrious and painstaking and he brought to his work an ability and capacity which constantly grew and ripened and which made him a most useful and honored member of the court. There could be no finer example of a conscientious recognition of a devotion to official duties and obligations than was displayed by Judge Hogan.6

Edward O’Hara, the publisher of The Syracuse Herald noted upon Hogan’s death, “[he] served the people with strenuous honesty and unselfishness and the high esteem in which he was held was his reward.”7

Judge Hogan was survived by his wife, Mrs. Louisa Smith Hogan, and two daughters, Mary Louise and Kathleen Hogan. He is buried at the Gate of Heaven Cemetery in Mt. Pleasant, New York.

Judge Hogan was survived by his wife Louisa, who died in 1945, and their two daughters, Mary Louisa and Kathleen. Both daughters were involved in charitable activities; neither married. Mary Louisa died in 1966, and Kathleen, before that, at a date not discovered by your editor.

We are unaware of any books or articles of Judge Hogan’s.