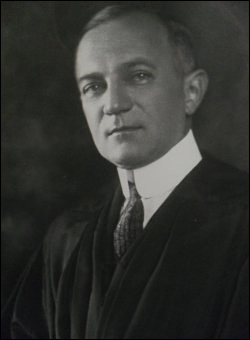 Born in Nastatten, Germany on June 8, 1877 to Reinhard and Magdalene Schmidt Wagner, Justice Wagner immigrated to the United States with his parents in 1885. His older brother and sisters had come to this country earlier. The family settled in New York City and Justice Wagner began attending public school, learning English at the same time. He worked at odd jobs to bring in money while attending high school. Justice Wagner graduated from City College (formerly known as College of the City of New York) in 1898. He received his law degree from New York Law School in 1900 and was admitted to the bar that same year.

Justice Wagner began practicing law in New York City and shortly thereafter became active in politics. In 1904, he was elected to the New York State Assembly where he served until 1909, when he became a New York State Senator. Justice Wagner became Minority Leader in 1915 and held this post until he retired in 1918. Throughout his career, Justice Wagner was a great advocate of laws to protect working people. While in the Senate, he served as chairman of the State Factory Investigating Commission from 1911 to 1915, and investigated the Triangle Shirtwaist Factory fire and other industrial hazards. Since he was majority leader of the Senate, when Governor William Sulzer was impeached in 1913 and replaced by Martin H. Glynn, Justice Wagner became acting Lieutenant Governor until the 1914 election.

In 1918, Justice Wagner was elected to the Supreme Court, First Judicial District. In 1923, he appeared before the Senate Judiciary Committee urging the Legislature to increase the number of Justices in the First Judicial District. He was designated an Associate Justice of the Appellate Division, First Department, in 1926 and resigned that same year in order to run for the United States Senate.

While in the Senate, Justice Wagner continued his efforts to help the working class. He sponsored a $2 billion public works program which President Herbert Hoover signed into law as the Emergency Relief and Reconstruction Act of 1932. After Franklin D. Roosevelt was elected President in 1932, Justice Wagner became the Senate’s leading advocate of New Deal legislation. He served as a United States Senator for 23 years, retiring in 1949 due to poor health. He had a heart ailment which practically made him an invalid for the last years of his life.

There is a middle school named after him on the upper east side of Manhattan.