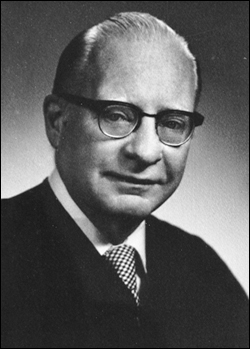 Justice Staley also sat on the bench of the 3rd Deparment; more information can be found HERE.

Ellis J. Staley, Jr. was born on September 12, 1914, in Albany, New York, the son of Ellis J. Staley, Sr., a Supreme Court Justice of the State of New York, 3rd Judicial District. The younger Staley graduated from Albany Academy in 1932 and Yale University in 1936, where he played on the Yale Bulldogs Men’s Basketball Team. In 1939, Staley received his law degree from Albany Law School. Bar admission followed later that year.

He held positions with several state agencies, including the Tax Department, the Law Revision Commission and the Highway Financing Commission. He also served as Albany County Republican Party Chairman. He was a member of the law firm of Browne, Staley, Sanford & Forner in Albany from 1944 to 1961. During those years he was also an associate professor of law at Albany Law School, teaching federal and state taxation.

Staley was elected to the Supreme Court, 3rd Judicial District in 1961. Three years later, Governor Rockefeller assigned him temporarily to the Appellate Division First Department, where he remained until 1968. In 1966, however, Justice Staley was designated to the Appellate Division Third Department, and so, for a time, his name appears on decisions rendered by both Departments. He retired voluntarily in 1980.

Justice Staley was married to Jane Kellogg Staley, with whom he had three children. He died after a long illness on January 12, 1981, at age 66.

Daniel C. Brennan, The History and Justices of the Appellate Division, Third Department, 1896 to the Present, Rev. November 2009, pp. 41-42, available at: http://www.nycourts.gov/ad3/history.pdf.