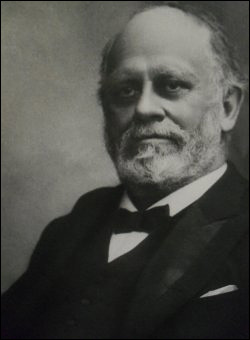 It was said of Justice Charles H. Van Brunt that “an impartial application of sound law is his rule of action, and honest lawyers are so well satisfied with the operation of that rule that on occasions when criticism might catch the ear of the public they have let it be known that Justice Van Brunt represents just the type of Judge that they want.” (Justice Charles H. Van Brunt, New York Times, June 25, 1899, p. IMS2.)

Justice Van Brunt was born on December 26, 1836 in Bay Ridge, Brooklyn ,where he attended primary school. He graduated from the University of the City of New York in 1856 and began studying law at the firm of Leonard & Hoffman. After his admission to the Bar in 1860, he continued to work for that firm, eventually making partner. He also served as counsel for the City Chamberlain.

He was appointed to the Court of Common Pleas in New York City in 1869 to fill a vacancy and was elected the following year to a full 14-year term. Van Brunt was elected to the Supreme Court in 1883, becoming Presiding Justice of the General Term in 1887. In that capacity, he instituted many court reforms and his decisions were frequently cited. In 1896, when the Appellate Division First Department was formed, Governor Morton appointed Justice Van Brunt Presiding Justice of that body. He was renominated in 1897 by all the political parties. He had no opponent and was therefore almost unanimously reelected.

Serving as Presiding Justice for the First Department was perhaps the high point of Justice Van Brunt’s career. With his new position he was able to set the framework of how the new court would function by establishing rules and procedures. In a time when his court was plagued with delays, he instituted reforms, virtually ending applications for postponement. The First Department thus became noted for a strong work ethic and great expediency under the leadership of Justice Van Brunt.

He did incur some controversy, however, during his time with the First Department. In 1903 he accepted the position of president of Windsor Trust Company, causing the public to question which would be his true priority. Van Brunt then clarified his position and stated that it would be an honorary role and that he would not take up active duties until his retirement from the bench.

Justice Van Brunt married Jennie E. Bull Van Brunt in 1874, with whom he had three children, a son and two daughters. He died suddenly on May 26, 1905 at age 69 from heart disease.